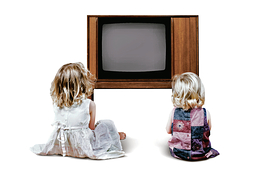 Source of photo: online version of the WSJ article quoted and cited below.

(p. A1) It didn’t take long after America started tuning in to television that people started to worry about what it was doing to children. “When it offers a daily diet of Western pictures and vaudeville by the hour, television often seems destined to entertain the child into a state of mental paralysis,” wrote The New York Times in 1949.

A generation later, the Scholastic Aptitude Test scores of college-bound teenagers had fallen significantly. A 1977 panel appointed by the College Entrance Examination Board suggested television bore some blame for the drop. Indeed, the decline began in the mid-1960s, just as the first students heavily exposed to TV took their SATs.

But University of Chicago Graduate School of Business economists Matthew Gentzkow and Jesse Shapiro aren’t sure that TV has been all that bad for kids. In a paper published in the Quarterly Journal of Economics this year, they presented a series of analyses that showed that the advent of television might actually have had a positive effect on children’s cognitive ability.

. . .
(p. A8) The economists . . . looked at results of a survey of 800 U.S. schools that administered tests to 346,662 sixth-grade, ninth-grade and 12th-grade students in 1965. Their finding: Adjusting for differences in household income, parents’ educational background and other factors, children who lived in cities that gave them more exposure to television in early childhood performed better on the tests than those with less exposure.

The economists found that television was especially positive for children in households where English wasn’t the primary language and parents’ education level was lower. “We don’t exactly know why that is, but a plausible interpretation is that the effect of television on cognitive development depends on what other kinds of activity television is substituting for,” says Mr. Shapiro, 28.

For the full story, see:
JUSTIN LAHART. “A New View On TV; Economists Probe the Data on Television Watching And Find It’s Not All Bad; Better Test Scores?” The Wall Street Journal (Sat., SEPTEMBER 6, 2008): A1 & A8.
(Note: ellipses added.)
If you are interesting in further reading that is in the same vein as the article above, consult:
Johnson, Steven. Everything Bad Is Good for You. New York: Riverhead Trade, 2006.