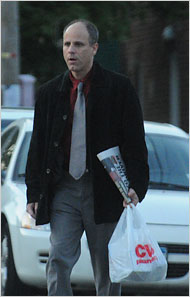 “The chief inspection official, Charles Miraglia, works on the side for at least one private elevator company.” Source of caption and photo: online version of the NYT article quoted and cited below.

(p. A27) More than a dozen members of the New York Housing Authority’s elevator staff — including the official who directs all safety inspections — also work second jobs for private companies in the elevator industry, according to interviews and city records.

The employees, including three managers and nearly half the inspection staff, say their second jobs do not conflict with their duties maintaining the 3,300 elevators in the authority’s 2,600 buildings. Tenant complaints and inspection records indicate that the authority’s elevators are among the worst maintained in the city.
All of the elevator staff members with second jobs, including the chief inspection official, Charles Miraglia, have received a waiver from the city’s Conflicts of Interest Board, which ruled the second jobs did not present an ethical conflict. Each waiver was granted, the board said, based on the endorsement of the Housing Authority chairman, Tino Hernandez, and an assurance from the employee that the job would not interfere with his authority duties.
. . .
Criticism of the way the authority, the nation’s largest public housing landlord, maintains its elevators intensified recently, after a 5-year-old boy died trying to escape a stalled elevator in an authority-owned building in Williamsburg, Brooklyn, on Aug. 19. The Brooklyn district attorney’s office continues to investigate that accident.
. . .
Some of those who received waivers to work a second job said in interviews that they worked only part time, and always after hours or on weekends.
Scott T. Hayes, a longtime elevator consultant and inspector for building owners in the city, said 99 percent of all commercial and residential inspections take place during normal business hours, and almost never on weekends. “If a building super works till 4:30 or 5 o’clock and then they’re off, and you show up at 6 o’clock and say I want to inspect the elevator, he’ll throw you out of the building,” Mr. Hayes said. “So I don’t know what kind of work they could be doing. It doesn’t make sense.”
Mr. Miraglia earns $104,000 a year in his authority post and received his waiver to work outside jobs in August 2007, at a time when the authority’s difficulties in inspecting elevators were already apparent.