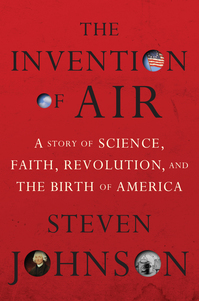 Steven Johnson’s The Ghost Map, about the determined entrepreneurial detective work that uncovered the cause of cholera, is one of my all-time favorite books, so I am now in the mode of reading everything else that Steven Johnson has written, or will write.
The most recent book, The Invention of Air, is not as spectacular as The Ghost Map, but is well-written on a thought-provoking topic. It focuses on Joseph Priestley’s role in the American Revolution. Priestley is best known as an early chemist, but Johnson paints him as a poly-math whose science was of a piece with his philosophy, politics and his religion.
Johnson’s broader point is that for many of the founding fathers, science was not a compartment of their lives, but part of the whole cloth (hey, it’s my blog, so I can mix as many metaphors as I want to).
And the neat bottom line is that Priestley’s method of science (and polity) is the same broadly empirical/experimental/entrepreneurial method that usually leads to truth and progress.
Along the way, Johnson makes many amusing and thought-provoking observations, such as the paragraphs devoted to his coffee-house theory of the enlightenment. (You see, coffee makes for clearer thinking than beer.)

The book:
Johnson, Steven. The Invention of Air: A Story of Science, Faith, Revolution, and the Birth of America. New York: Riverhead Books, 2008.