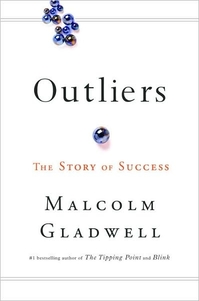 Malcolm Gladwell is on a roll. His three recent books have been best-sellers: The Tipping Point, Blink, and now Outliers. All three books are well-written, and deal with important issues.
I suspect that sometimes Gladwell over-simplifies and over-generalizes. But he often makes plausible, thought-provoking claims, and he presents academic research in a clear, painless way.
In the Outliers book, I enjoyed his examples: the NHL hockey players who are overwhelmingly born in the same three months, the entrepreneurial immigrant Jews entering the clothing business, silicon valley superstars having access to computers at an early age.
To Gladwell, the main point of the book is that over-achievers owe their success to lucky circumstances. But to me, the main point was a different one: in case after case, the successful put in a huge number of hours (about 10,000) of practice to achieve the mastery of their activities.
To use the memorable analogy from Collins’ Good to Great: hour after hour, day after day, year after year, they all kept “pushing the flywheel” to reach the threshold of excellence.

The reference for Outliers is:
Gladwell, Malcolm. Outliers: The Story of Success. New York, NY: Little, Brown, and Co., 2008.

The reference for Collins’ book is:
Collins, Jim. Good to Great: Why Some Companies Make the Leap. And Others Don’t. New York: HarperCollins Publishers, Inc., 2001.