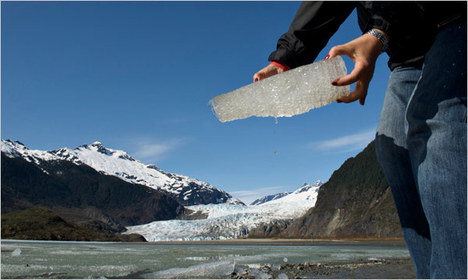 “Glaciers around Juneau are receding 30 feet or more each year.” Source of photo and caption: online version of the NYT article quoted and cited below.

(p. A1) JUNEAU, Alaska — Global warming conjures images of rising seas that threaten coastal areas. But in Juneau, as almost nowhere else in the world, climate change is having the opposite effect: As the glaciers here melt, the land is rising, causing the sea to retreat.

Morgan DeBoer, a property owner, opened a nine-hole golf course at the mouth of Glacier Bay in 1998, on land that was underwater when his family first settled here 50 years ago.
“The highest tides of the year would come into what is now my driving range area,” Mr. DeBoer said.
Now, with the high-tide line receding even farther, he is contemplating adding another nine holes.
“It just keeps rising,” he said.
The geology is complex, but it boils down to this: Relieved of billions of tons of glacial weight, the land has risen much as a cushion regains its shape after someone gets up from a couch. The land is ascending so fast that the rising seas — a ubiquitous byproduct of global warming — cannot keep pace. As a result, the relative sea level is falling, at a rate “among the highest ever recorded,” according to a 2007 report by a panel of experts convened by Mayor Bruce Botelho of Juneau.

(Note: the title of the online version of the article is: “As Alaska Glaciers Melt, It’s Land That’s Rising.”) 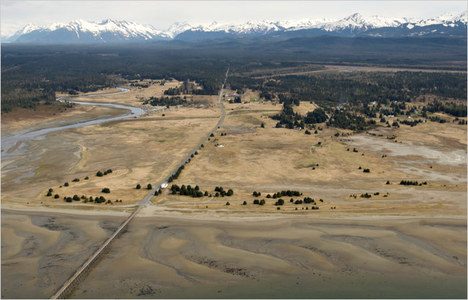 “Morgan DeBoer opened a nine-hole golf course, above, at the mouth of Glacier Bay in 1998 on land that did not exist when his family settled in the area 50 years ago.” Source of photo and caption: online version of the NYT article quoted and cited above.