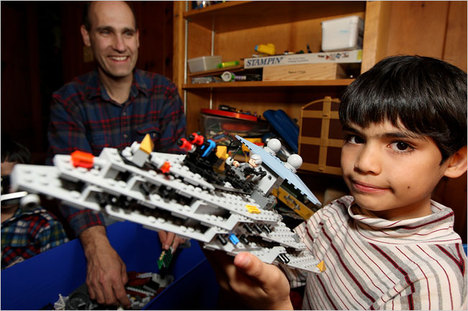 “David Batker with his son Rafael de la Torre Batker, 9, who worried it might hurt the environment if he bought a new set of Legos.” Source of photo and caption: online version of the NYT article quoted and cited below.

(p. A1) The thick-lined drawings of the Earth, a factory and a house, meant to convey the cycle of human consumption, are straightforward and child-friendly. So are the pictures of dark puffs of factory smoke and an outlined skull and crossbones, representing polluting chemicals floating in the air.

Which is one reason “The Story of Stuff,” a 20-minute video about the effects of human consumption, has become a sleeper hit in classrooms across the nation.
. . .
. . . many children who watch it take it to heart: riding in the car one day with his parents in Tacoma, Wash., Rafael de la Torre Batker, 9, was worried about whether it would be bad for the planet if he got a new set of Legos.
“When driving by a big-box store, you could see he was struggling with it,” his father, David Batker, said. But then Rafael said, “It’s O.K. if I have Legos because I’m going to keep them for a very long time,” Mr. Batker recalled.
. . .
(p. A12) “There was not one positive thing about capitalism in the whole thing,” Mr. Zuber said.
Corporations, for example, are portrayed as a bloated person sporting a top hat and with a dollar sign etched on its front. 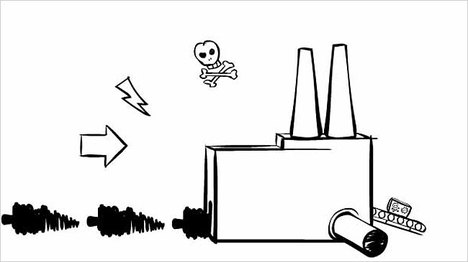 “A section of the video on toxic chemicals and production.” Source of image and caption: online version of the NYT article quoted and cited above.