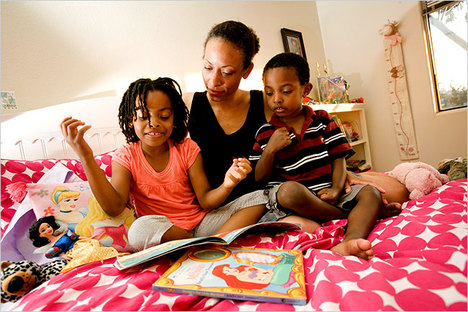 “ROYAL SUBJECTS; Donna Farmer, with her children, applauds Disney’s efforts.” Source of photo and caption: online version of the NYT article quoted and cited below.

In Gary Becker’s initially controversial doctoral dissertation, he argued that those who discriminate in the labor market pay a price for their prejudice: they end up paying higher wages, than do those employers are not prejudiced.
The bottom line is that the free market provides incentives for the encouragement of diversity and tolerance.
Similarly, Donna Farmer argues, in the passages below, that the marketplace provides the Disney company with incentives to have “The Princess and the Frog” appeal to black audiences.

(p. 1) “THE Princess and the Frog” does not open nationwide until December, but the buzz is already breathless: For the first time in Walt Disney animation history, the fairest of them all is black.
. . .
After viewing some photographs of merchandise tied to the movie, which is still unfinished, Black Voices, a Web site on AOL dedicated to African-American culture, faulted the prince’s relatively light skin color. Prince Naveen hails from the fictional land of Maldonia and is voiced by a Brazilian actor; Disney says that he is not white.
“Disney obviously doesn’t think a black man is worthy of the title of prince,” Angela Bronner Helm wrote March 19 on the site. “His hair and features are decidedly non-black. This has left many in the community shaking (p. 8) their head in befuddlement and even rage.”
Others see insensitivity in the locale.
“Disney should be ashamed,” William Blackburn, a former columnist at The Charlotte Observer, told London’s Daily Telegraph. “This princess story is set in New Orleans, the setting of one of the most devastating tragedies to beset a black community.”
ALSO under scrutiny is Ray the firefly, performed by Jim Cummings (the voice of Winnie the Pooh and Yosemite Sam). Some people think Ray sounds too much like the stereotype of an uneducated Southerner in an early trailer.
Of course, armchair critics have also been complaining about the princess. Disney originally called her Maddy (short for Madeleine). Too much like Mammy and thus racist. A rumor surfaced on the Internet that an early script called for her to be a chambermaid to a white woman, a historically correct profession. Too much like slavery.
And wait: We finally get a black princess and she spends the majority of her time on screen as a frog?
. . .
Donna Farmer, a Los Angeles Web designer who is African-American and has two children, applauded Disney’s efforts to add diversity.
“I don’t know how important having a black princess is to little girls — my daughter loves Ariel and I see nothing wrong with that — but I think it’s important to moms,” she said.
“Who knows if Disney will get it right,” she added. “They haven’t always in the past, but the idea that Disney is not bending over backward to be sensitive is laughable. It wants to sell a whole lot of Tiana dolls and some Tiana paper plates and make people line up to see Tiana at Disney World.” 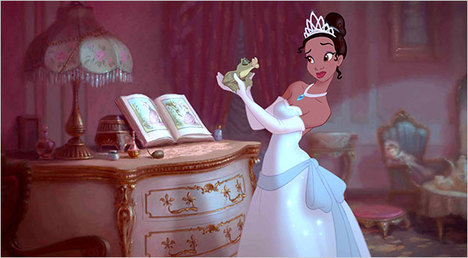 Movie still of Princess Tiana from Disney’s “The Princess and the Frog” to be released in December 2009. Source of movie still: online version of the NYT article quoted and cited above.