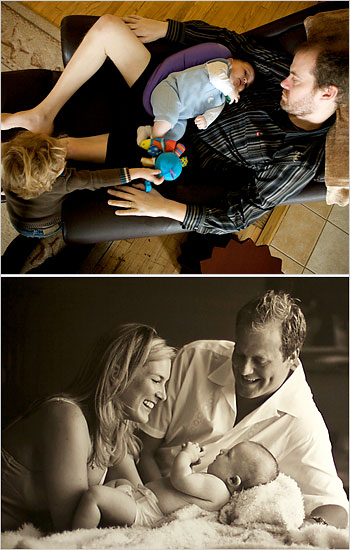 “JOSHUA THOMPSON with his sons, Wyatt and Jordan, after his diagnosis, top, and before, with his wife, Joy, and Wyatt.” Source of the photos and caption: online version of the NYT article quoted and cited below.

(p. 1) VIRGINIA BEACH — As Lou Gehrig’s disease sapped Joshua Thompson of his ability to move and speak last fall, he consistently summoned one question from within the prison of his own body. “Iplex,” he asked, in a whisper that pierced his mother’s heart. “When?”

Iplex had never been tested in people with amyotrophic lateral sclerosis, the formal name for the fatal disease that had struck Joshua, 34, in late 2006. Developed for a different condition and banished from the market by a patent dispute, it was not for sale to the public anywhere in the world.
But Kathy Thompson had vowed to get it for her son. On the Internet, she had found enthusiastic reviews from A.L.S. patients who had finagled a prescription for Iplex when it was available, along with speculation by leading researchers as to why it might slow the progressive paralysis that marks the disease. And for months, as she begged and bullied biotechnology companies, members of Congress, Italian doctors and federal drug regulators, she answered Joshua the same way:
“Soon,” she said. “Soon.”
At a time when terminally ill patients have more access to medical research than ever before, and perhaps a deeper conviction in its ability to cure them, many are campaigning for the chance to be treated with drugs whose safety and effectiveness is not yet known.
. . .
(p. 19) “Josh’s sadness is unbearable,” his mother wrote one night in her journal, nearly a year after her son’s diagnosis.
Unexpected encouragement came in a Mother’s Day note from her ex-husband. “You have given me some peace of mind that all potential options for Josh are being researched and acted upon,” Bruce wrote. “Thank you.”
Kathy’s boyfriend accompanied her to Insmed’s headquarters in Richmond, Va., offering to raise several million dollars to underwrite a compassionate use program for Iplex in the United States with A.L.S. patients. But the couple came away with a new understanding: F.D.A. regulations, they were told, prohibit any company from profiting on compassionate use. Even if Insmed could wriggle free of restrictions in the patent agreement, there was little financial incentive for it to invest in making the drug solely for compassionate use by A.L.S. patients.
. . .
On Jan. 16, when Dr. Werwath called to tell her the application had been rejected, she stood up in disbelief.
“How could that be?” she asked, dazed.
Kathy’s friend Mrs. Reimers had received a call with the same news.
“He said they had safety concerns,” Mrs. Reimers said. “This for a drug that was approved for children!”
“Safety,” Kathy repeated. “And what, exactly, is safe about A.L.S.?”

Appealing an F.D.A. Denial
Before the F.D.A.’s decision, Kathy had spared little thought for any broader meaning of her quest for Joshua. But when she met with Richard A. Samp, a lawyer with the Washington Legal Foundation a week later, her outrage went beyond her son, and beyond Iplex.
“The F.D.A. is supposed to protect American citizens,” Kathy fumed over an iced tea in Williamsburg, Va. “How does denying dying patients access to this drug serve the common good?”
Mr. Samp had handled a lawsuit by a patient advocacy group, the Abigail Alliance, that had sought to establish a constitutional right for terminally ill patients to use experimental drugs. In the case, which the group had lost on appeal in 2007, the F.D.A. claimed that it granted “nearly all” requests for compassionate use.
They would first make an administrative appeal, Mr. Samp told Kathy, asserting that the F.D.A. had violated its own guidelines. If that failed, they could pursue litigation that might allow them to raise the constitutional question again in a federal court in Virginia.
. . .
Kathy was pouring milk for her cereal on the morning of March 10 when Dr. Werwath’s number flashed on her phone. The F.D.A. had just reversed itself, he said.
Before she could take a breath, Senator Mark Warner’s office called. E-mail bleeped in as the news seeped out.
In the weeks after the appeal, Kathy learned, the F.D.A. had reached out to Insmed. The agency had persuaded the company to run a clinical trial for Iplex with several dozen A.L.S. patients, and permitted it to recoup the hefty costs directly from participants. In the trial, some of the participants would get a placebo. That way, the F.D.A. wrote on its Web site, the next wave of A.L.S. patients would learn whether the drug was in fact beneficial or harmful.
But for now, the agency had ruled, Joshua and 12 other patients would be given Iplex outside of the trial, on a compassionate use basis, if they agreed to read all the data about the risks.

For the full version of a very long story, see:
AMY HARMON. “Months to Live; Fighting for a Last Chance at Life; One Family’s Tenacious Campaign for Access to an Unproven Drug.” The New York Times, First Section (Sun., May 17, 2009): 1, 18-19.
(Note: ellipses added.) 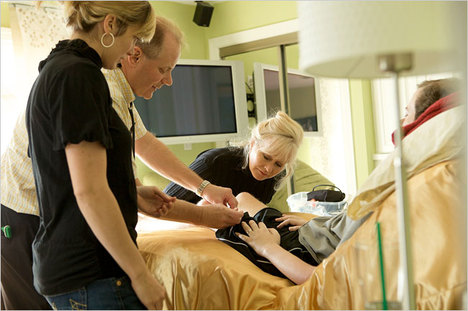 “IN MARCH, Joshua Thompson received his first Iplex injection, from Dr. David L. Werwath. Thereafter Joshua’s wife, Joy, left, and mother, Kathy, took over the daily duties.” Source of the photo and caption: online version of the NYT article quoted and cited above.