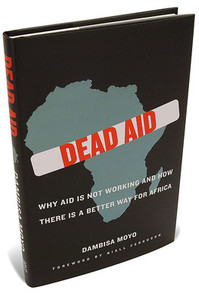 (p. A13) It is one of the great conundrums of the modern age: More than 300 million people living across the continent of Africa are still mired in poverty after decades of effort — by the World Bank, foreign governments and charitable organizations — to lift them out if it. While a few African countries have achieved notable rates of economic growth in recent years, per-capita income in Africa as a whole has inched up only slightly since 1960. In that year, the region’s gross domestic product was about equal to that of East Asia. By 2005, East Asia’s GDP was five times higher. The total aid package to Africa, over the past 50 years, exceeds $1 trillion. There is far too little to show for it.

Dambisa Moyo, a native of Zambia and a former World Bank consultant, believes that it is time to end the charade — to stop proceeding as if foreign aid does the good that it is supposed to do. The problem, she says in “Dead Aid,” is not that foreign money is poorly spent (though much of it is) or that development programs are badly managed (though many of them are). No, the problem is more fundamental: Aid, she writes, is “no longer part of the potential solution, it’s part of the problem — in fact, aid is the problem.”
In a tightly argued brief, Ms. Moyo spells out how attempts to help Africa actually hurt it. The aid money pouring into Africa, she says, underwrites brutal and corrupt regimes; it stifles investment; and it leads to higher rates of poverty — all of which, in turn, creates a demand for yet more aid. Africa, Ms. Moyo notes, seems hopelessly trapped in this spiral, and she wants to see it break free. Over the past 30 years, she says, the most aid-dependent countries in Africa have experienced economic contraction averaging 0.2% a year.

The reference to the book under review, is:
Moyo, Dambisa. Dead Aid: Why Aid Is Not Working and How There Is a Better Way for Africa. New York: Farrar, Straus and Giroux, 2009.