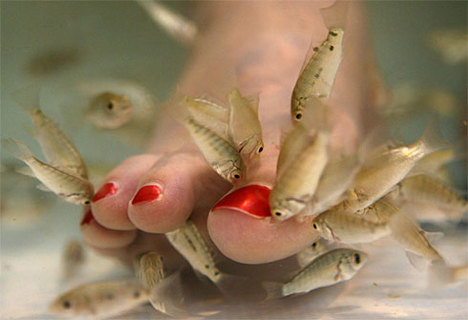 (p. A1) Until Mr. Ho brought his skin-eating fish here from China last year, no salon in the U.S. had been publicly known to employ a live animal in the exfoliation of feet. The novelty factor was such that Mr. Ho became a minor celebrity. On “Good Morning America” in July, Diane Sawyer placed her feet in a tank supplied by Mr. Ho and compared the fish nibbles to “tiny little delicate kisses.”

Since then, cosmetology regulators have taken a less flattering view, insisting fish pedicures are unsanitary. At least 14 states, including Texas and Florida, have outlawed them. Virginia doesn’t see a problem. Ohio permitted fish pedicures after a review, and other states haven’t yet made up their minds. The world of foot care, meanwhile, has been plunged into a piscine uproar. Salon owners who (p. A12) bought fish and tanks before the bans were imposed in their states are fuming.
The issue: cosmetology regulations generally mandate that tools need to be discarded or sanitized after each use. But epidermis-eating fish are too expensive to throw away. “And there’s no way to sanitize them unless you bake them for 20 minutes at 350 degrees,” says Lynda Elliott, an official with the New Hampshire Board of Barbering, Cosmetology and Esthetics. The board outlawed fish pedicures in November.
In Ohio, ophthalmologist Marilyn Huheey, who sits on the Ohio State Board of Cosmetology, decided to try it out for herself in a Columbus salon last fall. After watching the fish lazily munch on her skin, she recommended approval to the board. “It seemed to me it was very sanitary, not sterile of course,” Dr. Huheey says. “Sanitation is what we’ve got to live with in this world, not sterility.”
. . .
State bans have disrupted Mr. Ho’s plans to build a nationwide franchise network. Currently, he has four active franchises, in Virginia, Delaware, Maryland and Missouri. But others have terminated franchise agreements. In Calhoun, Ga., Tran Lam, owner of Sky Nails, says she paid Mr. Ho $17,500 in exchange for fish and custom-made pedicure tanks. A few weeks later, in October, the Georgia Board of Cosmetology deemed fish pedicures illegal. “I’m very mad,” says Ms. Lam. “I lost a lot of money and the economy is so bad.”