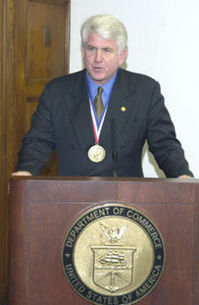 Robert Metcalfe receiving the National Medal of Technology in 2003. Source of photo: http://en.wikipedia.org/wiki/Robert_Metcalfe

The author of the commentary quoted below is famous in the history of information technology. His Harvard dissertation draft on packet switching was rejected as unrealistic. So he left the academy and became the main innovator responsible for making packet switching a reality, through the ethernet.
(He is also the “Metcalfe” behind “Metcalfe’s Law” about the value of a network increasing at a faster rate than the increase in the network’s size.)

(p. A15) . . . new small reactors meet important criteria for nuclear power plants. With no control rods to jam, they are far safer than the old models — you might well call them nuclear batteries. By not using weapons-grade enriched fuels, they are nonproliferating. They minimize nuclear waste. And they’re economical.
. . .
As venture capitalists, we at Polaris might have invested in one or two of these fission-energy start-ups. Alas, we had to pass. The problem with their business plans weren’t their designs, but the high costs and astronomical risks of designing nuclear reactors for certification in Washington.
The start-ups estimate that it will cost each of them roughly $100 million and five years to get their small reactor designs certified by the Nuclear Regulatory Commission. About $50 million of each $100 million would go to the commission itself. That’s a lot of risk capital for any venture-backed start-up, especially considering that not one new commercial nuclear reactor design has been approved and built in the United States for 30 years.
. . .

As we learned by building the Internet, fiercely competitive teams of research professors, graduate students, engineers, entrepreneurs and venture capitalists are the best drivers of technological innovation — not big corporations, and certainly not government bureaucracies. So, if it’s cheap and clean energy we want, we should clear the way for fission energy start-ups. We should lower the barriers at the Nuclear Regulatory Commission for the approval of new nuclear reactors, especially the new small ones. In particular, we should drop the requirement that the commission be reimbursed for reconsidering new fission reactor designs.