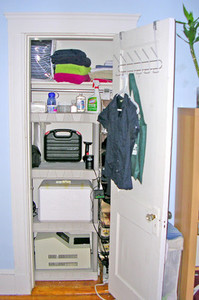 “Katherine’s Aull’s closet laboratory in her apartment.” Source of photo and caption: online version of the WSJ article quoted and cited below.

The individual independent scientist used to play an important role in the advance of science, but over time mainly disappeared as the academic scientist, supported by large institutions, became dominant. The dominance of funding from incumbent institutions may constrain major innovations, and so I have speculated that it might be beneficial to find ways for it again to be possible for independent individual scholars to play important roles in science.
Astronomy is one area in which this still happens. The article quoted below points to another domain in which individual scholars might be able to make contributions.

(p. A1) In Massachusetts, a young woman makes genetically modified E. coli in a closet she converted into a home lab. A part-time DJ in Berkeley, Calif., works in his attic to cultivate viruses extracted from sewage. In Seattle, a grad-school dropout wants to breed algae in a personal biology lab.

These hobbyists represent a growing strain of geekdom known as biohacking, in which do-it-yourselfers tinker with the building blocks of life in the comfort of their own homes. Some of them buy DNA online, then fiddle with it in hopes of curing diseases or finding new biofuels.
. . .
Ms. Aull, 23 years old, is designing a customized E. coli in the closet of her Cambridge, Mass., apartment, hoping to help with cancer research.
She’s got a DNA “thermocycler” bought on eBay for $59, and an incubator made by combining a styrofoam box with a heating device meant for an iguana cage. A few months ago, she talked about her hobby on DIY Bio, a Web site frequented by biohackers, and her work was noted in New Scientist magazine.
. . .
(p. A14) Phil Holtzman, a college student and part-time DJ at dance parties in Berkeley, Calif., is growing viruses in his attic that he thinks could be useful in medicine someday. Using pipettes and other equipment borrowed from his community college, he extracts viruses called bacteriophage from sewage and grows them in petri dishes. Mr. Holtzman’s goal: Breed them to survive the high temperatures of the human body, where he thinks they might be useful in killing bad bacteria.
He collects partly treated sewage water from a network of underground tunnels in the Berkeley area, jumping a chain-link fence to get to the source. But Mr. Holtzman says his roommates are “really uncomfortable” with him working with sewage water, so he’s trying to find another source of bacteriophage.

One thought on “Individual Independent “Biohackers” Hope to Advance Science”