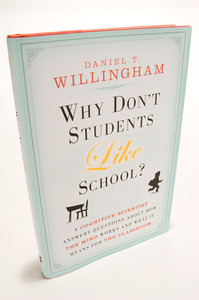 Source of book image: online version of the WSJ article quoted and cited below.

The trendy notion that each person has a unique learning style comes under an especially withering assault. “How should I adjust my teaching for different types of learners?” asks Mr. Willingham’s hypothetical teacher. The disillusioning reply: “No one has found consistent evidence supporting a theory describing such a difference. . . . Children are more alike than different in terms of how they think and learn.”
It turns out that while education gurus were promoting the uplifting vision of all students being equal in ability but unique in “style,” researchers were testing the theory behind it. In one experiment, they presented vocabulary words to students classified as “auditory learners” and “visual learners.” Half the words came in sound form, half in print. According to the learning-styles theory, the auditory learners should remember the words presented in sound better than the words presented in print, and vice-versa for the visual learners.
But this is not what happened: Each type of learner did just as well with each type of presentation. Why? Because what is being taught in most of the curriculum — at all levels of schooling — is information about meaning, and meaning is independent of form. “Specious,” for instance, means “seemingly logical, but actually fallacious” whether you hear it, see it or feel it out in Braille. Mr. Willingham makes a convincing case that the distinction between visual, auditory and kinesthetic learners (who supposedly learn best when body movement is involved) is a specious one. At some point, no amount of dancing will help you learn more algebra.

For the full review, see:
CHRISTOPHER F. CHABRIS. “Bookshelf; How to Wake Up Slumbering Minds
Will the discoveries of neuroscientists help us to think, learn and remember?.” Wall Street Journal (Mon., APRIL 27, 2009): A13.
(Note: the initial ellipsis was added; the ellipsis internal to the first full paragraph, was in the original.)

The book being reviewed, is:
Willingham, Daniel T. Why Don’t Students Like School?: A Cognitive Scientist Answers Questions About How the Mind Works and What It Means for the Classroom. San Francisco: Jossey-Bass, 2009.