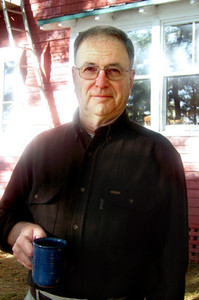 “When he was a graduate student in the 1960s working to reduce pollutants, Thomas Crocker devised a cap-and-trade system similar to one being considered in Congress.” Source of photo and caption: online version of the WSJ article quoted and cited below.

(p. A7) In the 1960s, a University of Wisconsin graduate student named Thomas Crocker came up with a novel solution for environmental problems: cap emissions of pollutants and then let firms trade permits that allow them to pollute within those limits.

Now legislation using cap-and-trade to limit greenhouse gases is working its way through Congress and could become the law of the land. But Mr. Crocker and other pioneers of the concept are doubtful about its chances of success. They aren’t abandoning efforts to curb emissions. But they are tiptoeing away from an idea they devised decades ago, doubting it can work on the grand scale now envisioned.
“I’m skeptical that cap-and-trade is the most effective way to go about regulating carbon,” says Mr. Crocker, 73 years old, a retired economist in Centennial, Wyo. He says he prefers an outright tax on emissions because it would be easier to enforce and provide needed flexibility to deal with the problem.
. . .
Mr. Crocker sees two modern-day problems in using a cap-and-trade system to address the global greenhouse-gas issue. The first is that carbon emissions are a global problem with myriad sources. Cap-and-trade, he says, is better suited for discrete, local pollution problems. “It is not clear to me how you would enforce a permit system internationally,” he says. “There are no institutions right now that have that power.”
Europe has embraced cap-and-trade rules. Emissions initially rose there because industries were given more permits than they needed, and regulators have since tightened the caps. Meanwhile China, India and other developing markets are reluctant to go along, fearing limits would curb their growth. If they don’t participate, there is little assurance that global carbon emissions will slow much even if the U.S. goes forward with its own plan. And even if everyone signs up, Mr. Crocker says, it isn’t clear the limits will be properly enforced across nations and industries.
The other problem, Mr. Crocker says, is that quantifying the economic damage of climate change — from floods to failing crops — is fraught with uncertainty. One estimate puts it at anywhere between 5% and 20% of global gross domestic product. Without knowing how costly climate change is, nobody knows how tight a grip to put on emissions.
In this case, he says Washington needs to come up with an approach that will be flexible and easy to adjust over a long stretch of time as more becomes known about damages from greenhouse-gas emissions. Mr. Crocker says cap-and-trade is better suited for problems where the damages are clear — like acid rain in the 1990s — and a hard limit is needed quickly.
“Once a cap is in place,” he warns, “it is very difficult to adjust.” For example, buyers of emissions permits would see their value reduced if the government decided in the future to loosen the caps.