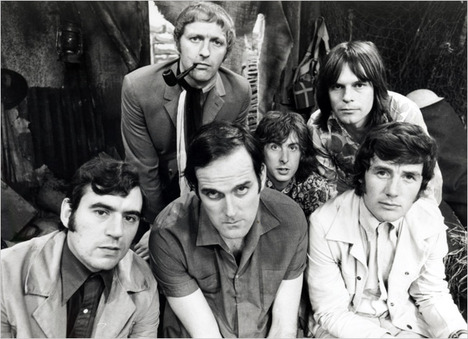 (p. 24) “A lot of contemporary comedy seems self-conscious,” Mr. Palin said. “It’s almost documentary, like ‘The Office.’ That’s a very funny show, but you’re looking at the human condition under stress. The Pythons made the human condition seem like fun.”

He added: “I’m proud to be a Python. It’s a badge of silliness, which is quite important. I was the gay lumberjack, I was the Spanish Inquisition, I was one-half of the fish-slapping dance. I look at myself and think that may be the most important thing I’ve ever done.”
Mr. Cleese and Mr. Jones, in rare agreement, both suggested that one reason the Pythons have never been successfully imitated is that television executives nowadays would never let anyone get away with putting together a show like theirs. When they began, they didn’t have an idea what the show should be about or even a title for it. The BBC gave them some money, and then, Mr. Cleese joked, the executives hurried off to the bar.
“The great thing was that in the beginning we had such a low profile,” he said. “We went on at different times, and some weeks we didn’t go on at all, because there might be a show-jumping competition. But that was the key to our feeling of freedom. We didn’t know what the viewing figures were, and we didn’t care. What has happened now is the complete reverse. Even the BBC is obsessed with the numbers.”
So obsessed, Bill Jones pointed out, that in the case of “Monty Python: Almost the Truth” some people encouraged the documentarians to see if they couldn’t squeeze the six hours down to one. 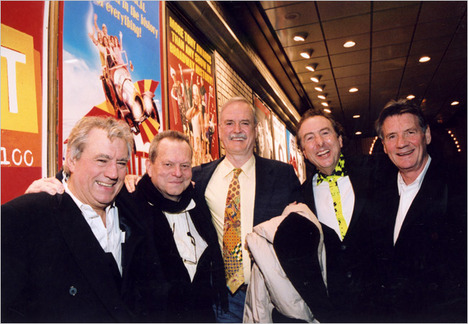 “Above from left, Mr. Jones, Mr. Gilliam, Mr. Cleese, Mr. Idle and Mr. Palin at the premiere of “Spamalot.”” Source of caption and photo: online version of the NYT article quoted and cited above.