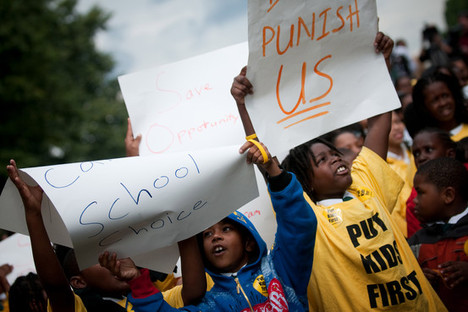 “Students from Bridges Academy in Washington, D.C., at a Capitol Hill rally last month in support of the city’s Opportunity Scholarship Program, which gives students from low-income families scholarships for private schools.” Source of caption and photo: online version of the WSJ article quoted and cited below.

(p. A2) The District of Columbia’s embattled school-voucher program, which lawmakers appeared to have killed earlier this year, looks like it could still survive.

Congress voted in March not to fund the program, which provides certificates to pay for recipients’ private-school tuition, after the current school year. But after months of pro-voucher rallies, a television-advertising campaign and statements of support by local political leaders, backers say they are more confident about its prospects. Even some Democrats, many of whom have opposed voucher efforts, have been supportive.
. . .
Many parents whose children receive vouchers say they are satisfied with the private schools they attend. During the 2008-2009 school year, about 61,700 students nationwide received vouchers, up 9% from the previous school year, according to the Alliance for School Choice, a pro-voucher advocacy group.
. . .
Created as a five-year pilot project by a Republican-controlled Congress in early 2004, the Opportunity Scholarship Program is the nation’s only federally funded voucher program. It is open to students who live in the long-struggling Washington school district and whose families have incomes at or below 185% of the federal poverty level — about $40,000 for a family of four. Recipients are chosen by lottery, although preference is given to those attending traditional schools deemed to be in need of improvement under federal law.
Joe Kelley entered his oldest son, Rashawn, in the first Opportunity Scholarship Program lottery in 2004, fearful about violence at the public middle school. Rashawn, now 17, received a voucher, and so have his three sisters. All attend a small, private Christian academy where they have been earning A’s and B’s. “It’s a lot of worry off of me,” said Mr. Kelley, a retired cook and youth counselor.
In an evaluation released in March, researchers found that in reading skills, voucher recipients overall were approximately 3.1 months ahead of eligible students who didn’t receive scholarships. But there was no difference in math skills, and voucher recipients from the worst-performing public schools got no boost in either subject.