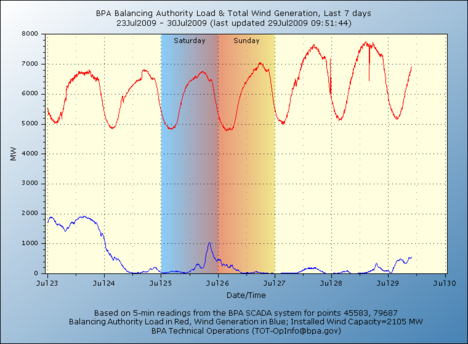 (p. A14) For more than a century, producing power has been a matter of flipping a switch. Need more electricity? Fire up some fuel. Need less? Dial the flame back down.

Things won’t be that easy in a world that gets much of its energy from renewable sources, which come and go at nature’s whim. Wind tends to blow hardest at night — a problem, since people use electricity mostly during the day. Sunshine can lose its intensity in seconds if eclipsed by a cloud — inconvenient for people who like their air conditioners to run steadily on summer days.
. . .
Most of the electricity in Bonneville’s service area comes from hydroelectric power. To compensate for the volatility of wind, Bonneville tweaks the amount of water it lets through the dams. But that doesn’t work for the most extreme shifts in wind. Sometimes, when the wind is blowing hard, Bonneville releases extra water over the tops of dams without using it to generate electricity. Otherwise, electrical wires might get overloaded. And when the wind is so strong that Bonneville can’t ditch enough water, the utility orders wind turbines shut off.
“Everything changes with wind,” says Bart McManus, a wind expert at Bonneville.
Sudden doldrums can be as troublesome as sudden gusts. That was the problem on Feb. 26, 2008, in Texas, which produces more wind power than any other state.
At 3 p.m. that afternoon, Texas’s wind farms, concentrated in the western part of the state, were throwing off about 2,000 megawatts of electricity, enough to serve about one million households. Then a cold front blew in. By 6:30 p.m. — when electricity demand typically peaks — wind production in Texas had cratered to about 360 megawatts.
Exacerbating matters, Texans began turning up their heat — much of which, in rural parts of the state, comes from electricity. So, just as wind power unexpectedly plummeted, demand for power spiked.

For the full commentary, see:
JEFFREY BALL. “Unbridled Energy: Predicting Volatile Wind, Sun
Utilities Ramp Up Focus on Forecasting When Renewable Fuel Is at a Peak to Avoid Squandering Power That Still Can’t Be Stored.” The Wall Street Journal (Fri., OCTOBER 5, 2009): A14.
(Note: ellipsis added.)
(Note: the last sentence of the quoted passage, appeared in the print edition, but was inexplicably deleted from the online version.)

For an updated “Near-Real-Time” graph of BPA load and wind generation, see: