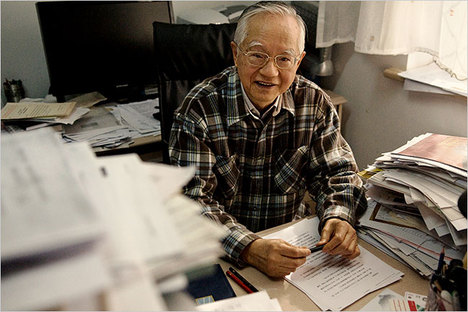 “Wu Jinglian helped to create China’s market economy, and now he is defending it against conservative hardliners in the Communist Party.” Source of caption and photo: online version of the NYT article quoted and cited below.

(p. 1) AT 79, Wu Jinglian is considered China’s most famous economist.

In the 1980s and ’90s, he was an adviser to China’s leaders, including Deng Xiaoping. He helped push through some of this country’s earliest market reforms, paving the way for China’s spectacular rise and earning him the nickname “Market Wu.”
Last year, China’s state-controlled media slapped him with a new moniker: spy.
Mr. Wu has not been interrogated, charged or imprisoned. But the fact that a state newspaper, The People’s Daily, among others, was allowed to publish Internet rumors alleging that he had been detained on suspicions of being a spy for the United States hints that he is annoying some very important people in the government.
He denied the allegations, and soon after they were published, China’s cabinet denied that an investigation was under way.
But in a country that often jails critics, Mr. Wu seems to be testing the limits of what Beijing deems permissible. While many economists argue that China’s growth model is flawed, rarely does a prominent Chinese figure, in the government or out, speak with such candor about flaws he sees in China’s leadership.
Mr. Wu — who still holds a research post at an institute affiliated with the State Council, China’s cabinet — has white hair and an amiable face, and he appears frail. But his assessments are often harsh. In books, speeches, interviews and television appearances, he warns that conservative hardliners in the Communist Party have gained influence in the government and are trying to dismantle the market reforms he helped formulate.
He complains that business tycoons and corrupt officials have hijacked the economy and manipulated it for their own ends, a system he calls crony capitalism. He has even called on Beijing to establish a British-style democracy, arguing that political reform is inevitable.
Provocative statements have made him a kind of dissident economist here, and revealed the sharp debates behind the scenes, at the highest levels of the Communist Party, about the direction of China’s half-market, half-socialist economy.
In many ways, it is a continuation of the debate that has been raging for three decades: What role should the government play in China’s hybrid economy?
Mr. Wu says the spy rumors were “dirty tricks” employed by his critics to discredit him.
“I have two enemies,” he said in a recent interview. “The crony capitalists and the Maoists. They will use any means to attack me.”
. . .
(p. 7) In interviews, Mr. Wu says he feels compelled to speak out because conservatives and “old-style Maoists” have been gaining influence in the government since 2004. These groups, he said, are pressing for a return to central planning and placing blame for corruption and social inequality on the very market reforms he championed.
At the same time, Mr. Wu says, corrupt bureaucrats are pushing for the state to take a larger economic role so they can cash in on their positions through payoffs and bribes, as well as by steering business to allies.
“I’m not optimistic about the future,” Mr. Wu said. “The Maoists want to go back to central planning and the cronies want to get richer.”

Source of timeline graphic: online version of the NYT article quoted and cited above.