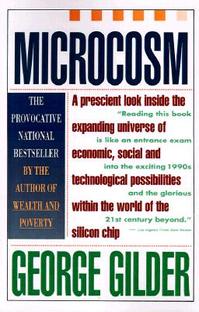 Many years ago Telecosm was the first George Gilder book that I read; I enjoyed it for its over-the-top verbal exuberance in detailing, praising and predicting the progress of the then-new broadband technologies. I bought his earlier Microcosm at about the same time, but didn’t get around to reading it because I assumed it would be a dated read, dealing in a similar manner with the earlier personal computer (PC) technology.
In the last year or so I have read Gilder’s Wealth and Poverty and Recapturing the Spirit of Enterprise. There is some interesting material in Gilder’s famous Wealth and Poverty, which has sometimes been described as one of the main intellectual manifestos of the Reagan administration. But Recapturing the Spirit of Enterprise has become my favorite Gilder book (so far).
In each chapter, the main modus operandi of that book is to present a case study of a recent entrepreneur, with plenty of interpretation of the lessons to be learned about why entrepreneurship is important to the economy, what sort of personal characteristics are common in entrepreneurs, and what government policies encourage or discourage entrepreneurs.
In that book I read that the original plan had been to include several chapters on the entrepreneurs who had built the personal computer revolution. But the original manuscript grew to unwieldy size, and so the personal computer chapters became the basis of the book Microcosm.
So Microcosm moved to the top of my “to-read” list, and turned out to be a much less-dated book than I had expected.
Microcosm does for the personal computer entrepreneurs what Recapturing the Spirit of Enterprise did for a broader set of entrepreneurs.
In the next few weeks, I will occasionally quote a few especially important examples or thought-provoking observations from Microcosm.