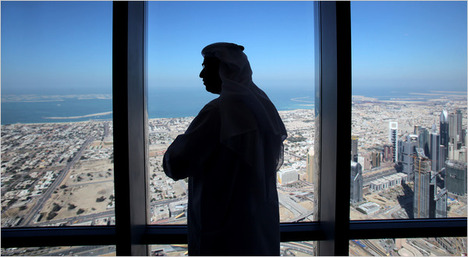 “A man took in the view of Dubai from the 124th floor of the newly opened, $1.5 billion Burj Khalifa, a rocket-shaped building that soars 2,717 feet.” Source of caption and photo: online version of the NYT article quoted and cited below.

(p. A7) CAIRO — In the heady days of the Dubai gold rush, when real estate sold and resold even before a shovel hit the ground, the ambitious emirate was hailed as the model of Middle Eastern modernity, a boomtown that built an effective, efficient and accessible form of government.

Then the crash came and revealed how paper-thin that image was, political and financial analysts said. That realization, not just in Dubai but also in Abu Dhabi, the oil-rich capital of the United Arab Emirates, has cast a harsh light on an opaque, top-down decision-making process, not just in business but in matters of crime and punishment as well, political and financial analysts said.
The financial crisis and now two criminal cases that have generated critical headlines in other countries have demonstrated that the emirates remain an absolute monarchy, where institutions are far less important than royalty and where the law is particularly capricious — applied differently based on social standing, religion and nationality, political experts and human rights advocates said.
“I think what we learned here the last four months is that the government, at least on a political level, is still very undeveloped,” said a financial analyst based in Dubai who asked not to be identified to avoid compromising his ability to work in the emirates. “It’s very difficult to read or interpret or understand what is going on. The institutions have not shaped up to people’s expectations.” 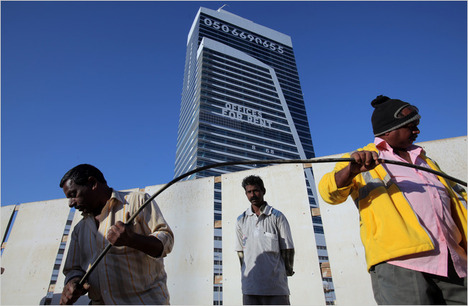 “Workers repaired a phone line next to an office building in Dubai’s Internet City. Even after a bailout, Dubai remains heavily burdened by debt.” Source of caption and photo: online version of the NYT article quoted and cited above.