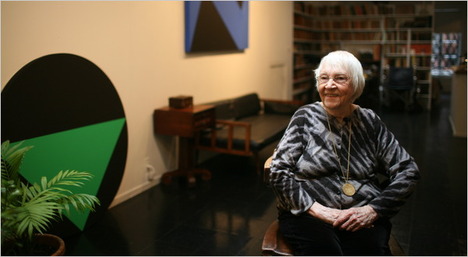 “Carmen Herrera in her Manhattan loft, surrounded by her art. She sold her first work in 2004.” Source of caption and photo: online version of the NYT article quoted and cited below.

(p. 1) Under a skylight in her tin-ceilinged loft near Union Square in Manhattan, the abstract painter Carmen Herrera, 94, nursed a flute of Champagne last week, sitting regally in the wheelchair she resents.

After six decades of very private painting, Ms. Herrera sold her first artwork five years ago, at 89. Now, at a small ceremony in her honor, she was basking in the realization that her career had finally, undeniably, taken off. As cameras flashed, she extended long, Giacomettiesque fingers to accept an art foundation’s lifetime achievement award from the director of the Walker Art Center in Minneapolis.
Her good friend, the painter Tony Bechara, raised a glass. “We have a saying in Puerto Rico,” he said. “The bus — la guagua — always comes for those who wait.”
And the Cuban-born Ms. Herrera, laughing gustily, responded, “Well, Tony, I’ve been at the bus stop for 94 years!”
Since that first sale in 2004, collectors have avidly pursued Ms. Herrera, and her radiantly ascetic paintings have entered the permanent collections of institutions like the Museum of Modern Art, the Hirshhorn Museum and the Tate Modern. Last year, MoMA included her in a pantheon of Latin American artists on exhibition. And this summer, during a retro-(p. 29)spective show in England, The Observer of London called Ms. Herrera the discovery of the decade, asking, “How can we have missed these beautiful compositions?”
In a word, Ms. Herrera, a nonagenarian homebound painter with arthritis, is hot. In an era when the art world idolizes, and often richly rewards, the young and the new, she embodies a different, much rarer kind of success, that of the artist long overlooked by the market, and by history, who persevered because she had no choice.
“I do it because I have to do it; it’s a compulsion that also gives me pleasure,” she said of painting. “I never in my life had any idea of money and I thought fame was a very vulgar thing. So I just worked and waited. And at the end of my life, I’m getting a lot of recognition, to my amazement and my pleasure, actually.”
. . .
But Ms. Herrera is less expansive about her own art, discussing it with a minimalism redolent of the work. “Paintings speak for themselves,” she said. Geometry and color have been the head and the heart of her work, she added, describing a lifelong quest to pare down her paintings to their essence, like visual haiku.
Asked how she would describe to a student a painting like “Blanco y Verde” (1966) — a canvas of white interrupted by an inverted green triangle — she said, “I wouldn’t have a student.” To a sweet, inquiring child, then? “I’d give him some candy so he’d rot his teeth.”
When pressed about what looks to some like a sensual female shape in the painting, she said: “Look, to me it was white, beautiful white, and then the white was shrieking for the green, and the little triangle created a force field. People see very sexy things — dirty minds! — but to me sex is sex, and triangles are triangles.”
. . .
Ms. Herrera’s late-in-life success has stunned her in many ways. Her larger works now sell for $30,000, and one painting commanded $44,000 — sums unimaginable when she was, say, in her 80s. “I have more money now than I ever had in my life,” she said.
Not that she is succumbing to a life of leisure. At a long table where she peers out over East 19th Street “like a French concierge,” Ms. Herrera, because she must, continues to draw and paint. “Only my love of the straight line keeps me going,” she said. 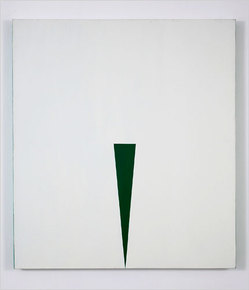 Source of captions and photos: online version of the NYT article quoted and cited above.