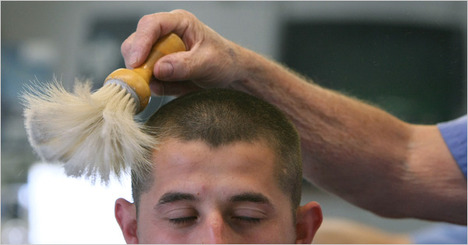 “A LITTLE OFF THE TOP; Michigan residents may have to pay a 5.5 percent tax for haircuts. States across the nation are considering similar taxes on services to solve their budget problems.” Source of caption and photo: online version of the NYT article quoted and cited below.

(p. 1) In the scramble to find something, anything, to generate more revenue, states are considering new taxes on virtually everything: garbage pickup, dating services, bowling night, haircuts, even clowns.

“It’s hard enough doing what we do,” grumbled John Luke, a plumber in the Philadelphia suburbs. His services would, for the first time, come with an added tax if the governor has his way.
Opponents of imposing taxes on services like funerals, legal advice, helicopter rides and dry cleaning argue that this push comes as businesses are barely clinging to life and can ill afford to see customers further put off by new taxes. This is especially true, they say, in states like Michigan and Pennsylvania, where some of the most sweeping proposals are being considered this spring.
But this is also a period of economic gloom for states. Pension funds are in the red, federal stimulus help will soon vanish, and revenues from traditional sources like income and property taxes are slumping ever lower, with few elected officials willing to risk voter wrath by raising them.
. . .
(p. 20) But from coast to coast, desperate governments are looking to tap into new revenue streams.
In Nebraska, a lawmaker has introduced a bill to tax armored car services, farm equipment repairs, shoe shines, taxidermy, reflexology and scooter repairs. In Kentucky, Jim Wayne, a state representative, and some fellow Democrats are proposing taxing high-end services: golf greens fees, limousine and hot-air-balloon rides, and private landscaping.
In June, voters in Maine will decide whether to accept a state overhaul of its tax system that would newly tax services like tailor alterations, blimp rides, and entertainment provided by clowns, comedians and jugglers. 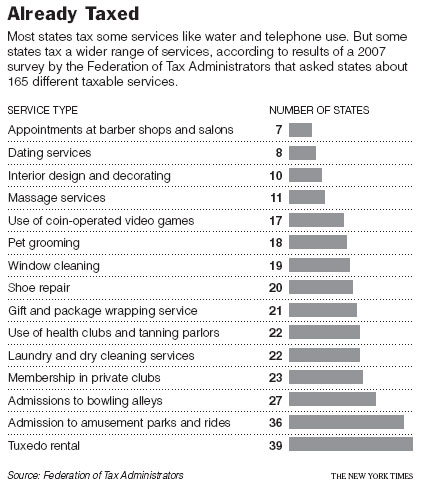