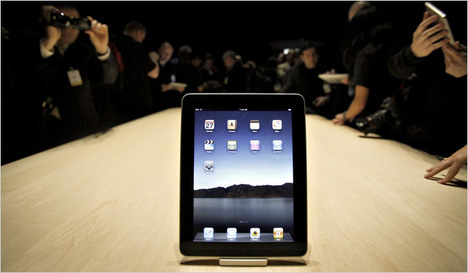 “GAME CHANGER? After months of anticipation, Apple unveiled its iPad tablet computer last week.” Source of caption and photo: online version of the NYT article quoted and cited below.

(p. 1) The more, the better. That’s the fashionable recipe for nurturing new ideas these days. It emphasizes a kind of Internet-era egalitarianism that celebrates the “wisdom of the crowd” and “open innovation.” Assemble all the contributions in the digital suggestion box, we’re told in books and academic research, and the result will be collective intelligence.

Yet Apple, a creativity factory meticulously built by Steven P. Jobs since he returned to the company in 1997, suggests another innovation formula — one more elitist and individual.
This approach is reflected in the company’s latest potentially game-changing gadget, the iPad tablet, unveiled last week. It may succeed or stumble but it clearly carries the taste and perspective of Mr. Jobs and seems stamped by the company’s earlier marketing motto: Think Different.
. . .
(p. 6) Great products, according to Mr. Jobs, are triumphs of “taste.” And taste, he explains, is a byproduct of study, observation and being steeped in the culture of the past and present, of “trying to expose yourself to the best things humans have done and then bring those things into what you are doing.”
His is not a product-design philosophy steered by committee or determined by market research. The Jobs formula, say colleagues, relies heavily on tenacity, patience, belief and instinct. He gets deeply involved in hardware and software design choices, which await his personal nod or veto. Mr. Jobs, of course, is one member of a large team at Apple, even if he is the leader. Indeed, he has often described his role as a team leader. In choosing key members of his team, he looks for the multiplier factor of excellence. Truly outstanding designers, engineers and managers, he says, are not just 10 percent, 20 percent or 30 percent better than merely very good ones, but 10 times better. Their contributions, he adds, are the raw material of “aha” products, which make users rethink their notions of, say, a music player or cellphone.
“Real innovation in technology involves a leap ahead, anticipating needs that no one really knew they had and then delivering capabilities that redefine product categories,” said David B. Yoffie, a professor at the Harvard Business School. “That’s what Steve Jobs has done.”