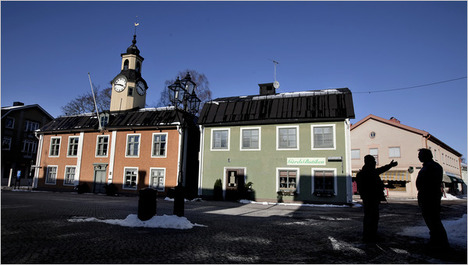 “Osthammar is competing for the right to host a storage site for radioactive waste.” Source of caption and photo: online version of the NYT article quoted and cited below.

Sweden, which swore off nuclear power after less than 20 percent of Swedes approved of it in a referendum in the 1980s, would seem an unlikely place for such a competition. But it has reversed course recently and plans to begin building new nuclear reactors, adding to the 10 it already operates.
But legislation requires that before any new plants can be built, the Swedish Nuclear Fuel and Waste Management Company, better known by the initials SKB, must first create permanent storage space for the radioactive waste the reactors produce.
In most countries, of course, people would sooner allow a factory hog farm or garbage incinerator in their backyards than a nuclear waste dump. But in Sweden, SKB found 18 of 20 possible towns near proposed sites intrigued by their proposition. Then it had to whittle the list down to two, Osthammar and Oskarshamn, both already the site of nuclear plants.
SKB recently said it would ask the Swedish government later this year for permission to build the storage depot in Osthammar. If the government gives the green light to Osthammar over Oskarshamn, construction could begin some time after 2015, officials said.
Claes Thegerstrom, a nuclear physicist who is the chief executive of SKB, attributed the new attitude of Swedes toward nuclear energy to fears of global warming. “In the 1980s nobody was mentioning CO2,” or carbon dioxide, considered the major cause of global warming, he said. “Now, it’s on the top of the list of environmental issues.” Since they burn no fossil fuels, nuclear power plants do not produce carbon dioxide.