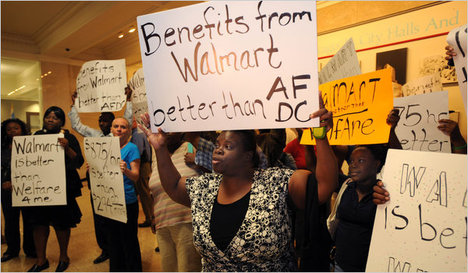 “Supporters of a proposed Wal-Mart store in Chicago demonstrated at a City Coumcil zoning panel hearing Thursday.” Source of caption and photo: online version of the NYT article quoted and cited below.

(p. B4) “We need jobs for our neighborhood, and Wal-Mart is willing to come, and they’re willing to provide the jobs,” said the Rev. Dr. D. Darrell Griffin, the pastor at Oakdale Covenant Church.

Politicians who supported the Wal-Mart store said they did so in part because of employment and revenue for the city.
“There are major corporations willing to invest significant money within our communities, which has not been done, really, since the ’60s, when a lot of the corporations left the communities after the riots,” said Howard B. Brookins Jr., a member of the council. “This is huge for us.”
. . .
On Thursday, the zoning committee meeting was filled with about 200 onlookers wearing T-shirts with the Wal-Mart logo and slogans like, “Our neighborhood. Our jobs. Our decision.”
Before he asked for a simple yes or no vote, Daniel Solis, chairman of the zoning committee, told the crowd, “We are now the model in this country.”
After the unanimous vote — which sends the proposal to the full City Council, where it is expected to pass next week — the audience stood and cheered.
“It’s going to bring jobs and help the community,” Shawn Polk, 20, a college student who lives near the proposed store, said afterward.