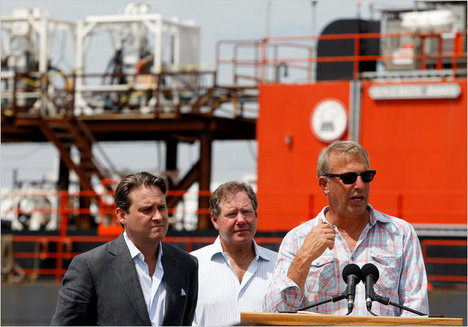 “One promising device is an oil-water separator backed by the actor Kevin Costner, right.” Source of caption and photo: online version of the NYT article quoted and cited below.

(p. A1) Two decades after the Exxon Valdez oil spill, cleanup technology has progressed so little that the biggest advancement in the Gulf of Mexico disaster — at least in the public’s mind — is an oil-water separator based on a 17-year-old patent and promoted by the movie star Kevin Costner.
. . .
(p. A20) Ms. Kinner [co-director of the Coastal Response Research Center at the University of New Hampshire] and others cite many . . . reasons why cleanup technologies lag.
In testimony this month before Congress, Mr. Costner told of years of woe trying to market his separator, a centrifuge originally developed and patented in 1993 by the Idaho National Laboratory, for use in oil spills. One obstacle, he said, was that although his machines are effective, the water they discharge is still more contaminated than environmental regulations allow. He could not get spill-response companies interested in his machines, he said, without a federal stamp of approval.

For the full story, see:
HENRY FOUNTAIN. “Since Exxon Valdez, Little Has Changed in Cleaning Oil Spills.” The New York Times (Fri., June 25, 2010): A1 & A20.
(Note: ellipses added; and bracketed words added from previous paragraph of article.)
(Note: the date of the online version of the article was June 24, 2010 and had the title “Advances in Oil Spill Cleanup Lag Since Valdez.”)