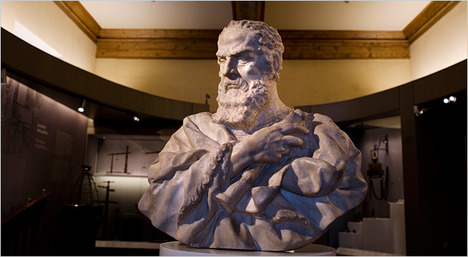 “A bust of Galileo at the Galileo Museum in Florence, Italy. The museum is displaying recovered parts of his body.” Source of caption and photo: online version of the NYT article quoted and cited below.

(p. A9) As a heretic he could not be given a proper church burial. But for years after his death, his followers in the circle of the grand dukes of Tuscany pushed to give him an honorable resting place.

Nearly a century later, in 1737, members of Florence’s cultural and scientific elite unearthed the scientist’s remains in a peculiar Masonic rite. Freemasonry was growing as a counterweight to church power in those years and even today looms large in the Italian popular imagination as an anticlerical force.
According to a notary who recorded the strange proceedings, the historian and naturalist Giovanni Targioni Tozzetti used a knife to slice off several fingers, a tooth and a vertebra from Galileo’s body as souvenirs but refrained, it appears, from taking his brain. The scientist was then reburied in a ceremony, “symmetrical to a beatification,” said Mr. Galluzzi.
After taking their macabre souvenirs, the group placed Galileo’s remains in an elegant marble tomb in Florence’s Santa Croce church, a pointed statement from Tuscany’s powers that they were outside the Vatican’s control. The church has long been a shrine to humanism as much as to religion, and Galileo’s permanent neighbors include Michelangelo, Machiavelli and Rossini.
. . .
Even today, centuries after Cardinal Robert Bellarmine, the pope’s theological watchdog, had Galileo arrested for preaching Copernicanism, the church has never quite managed to acknowledge that his heliocentric theory is correct. (For his part, Cardinal Bellarmine was made a saint in 1930.)
Pope John Paul II reopened the Galileo case in 1981, and in 1992 issued his committee’s findings: that the judges who condemned Galileo had erred but that the scientist had also erred in his arrogance in thinking that his theory would be accepted with no physical evidence.
. . .
. . . as recently as last fall, at a news conference introducing an exhibition of historic telescopic instruments at the Vatican Museums, the director of the Vatican’s Pontifical Council for Culture, Monsignor Gianfranco Ravasi, referred without blinking to “the errors committed by both sides” — indicating both the church and Galileo.