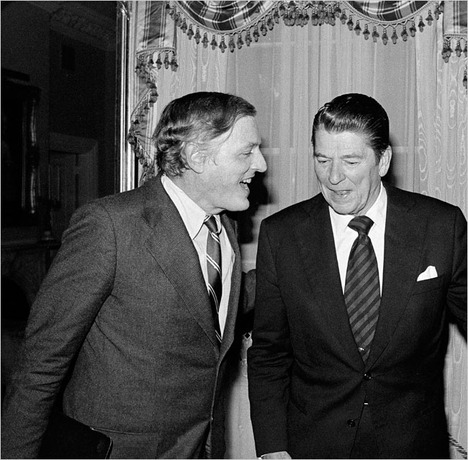 “William F. Buckley and Ronald Reagan in 1978, following their debate over the Panama Canal Treaty.” Source of caption and photo: online version of the NYT article quoted and cited below.

(p. 23) On the night that William F. Buckley met Ronald Reagan, the future president of the United States put his elbow through a plate-glass window. The year was 1961, and the two men were in Beverly Hills, where Buckley, perhaps the most famous conservative in America at the tender age of 35, was giving an address at a school auditorium. Reagan, a former Hollywood leading man dabbling in political activism — the Tim Robbins or Alec Baldwin of his day — had been asked to do the introductions.

But the microphone was dead, the technician was nowhere to be found and the control room was locked. As the crowd began to grumble, Reagan coolly opened one of the auditorium windows, stepped onto a ledge two stories above the street and inched his way around to the control room. He smashed his elbow through the glass and clambered in through the broken window. “In a minute there was light in the upstairs room,” Buckley later wrote, “and then we could hear the crackling of the newly animated microphone.”
This anecdote kicks off The Reagan I Knew (Basic Books, $25), a slight and padded reminiscence published posthumously this past autumn, nine months after Buckley’s death.