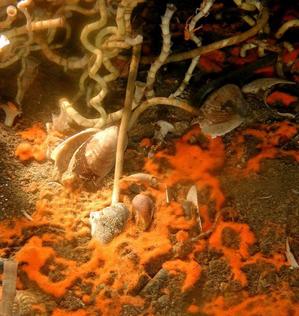 “In a cold-seep community a third of a mile down in the Gulf of Mexico, the orange mat in the foreground is a colony of microbes that live on oil and gas seeping up from the seabed, starting a complex food chain that results in a dark ecosystem. In the background are tubeworms, which can grow eight feet long and live for centuries. Near the tubeworms are snail and clam shells, which appear to be empty.”

Source of caption: online version of the NYT article quoted and cited below. Source of photo: http://www.plosbiology.org/article/fetchObject.action?uri=info%3Adoi%2F10.1371%2Fjournal.pbio.0030102.g001&representation=PNG_M (The photo on the NYT site was identical, but was in a more user-friendly format at the URL just-cited.)

(p. D1) . . . , in 1977, oceanographers working in the deep Pacific stumbled on bizarre ecosystems lush with clams, mussels and big tube worms — a cornucopia of abyssal life built on microbes that thrived in hot, mineral-rich waters welling up from volcanic cracks, feeding on the chemicals that leached into the seawater and serving as the basis for whole chains of life that got along just fine without sunlight.

In 1984, scientists found that the heat was not necessary. In exploring the depths of the Gulf of Mexico, they discovered sunless habitats powered by a new form of nourishment. The microbes that founded the food chain lived not on hot minerals but on cold petrochemicals seeping up from the icy seabed.
Today, scientists have identified roughly one hundred sites in the gulf where cold-seep communities of clams, mussels and tube worms flourish in the sunless depths. And they have accumulated evidence of many more — hundreds by some estimates, thousands by others — most especially in the gulf’s deep, unexplored waters.
“It wouldn’t surprise me if there were 2,000 communities, from suburbs to cities,” said Ian R. MacDonald, an oceanographer at Florida State University who studies the dark ecosystems.
. . .
(p. D4) “There’s lots of uncertainty,” said Charles R. Fisher, a professor of biology at Pennsylvania State University, who is leading a federal study of the dark habitats and who observed the nearby community. “Our best hope is that the impact is neutral or a minor problem.”
A few scientists say the gushing oil — despite its clear harm to pelicans, turtles and other forms of coastal life — might ultimately represent a subtle boon to the creatures of the cold seeps and even to the wider food chain.
“The gulf is such a great fishery because it’s fed organic matter from oil,” said Roger Sassen, a specialist on the cold seeps who recently retired from Texas A&M University. “It’s preadapted to crude oil. The image of this spill being a complete disaster is not true.”

One thought on “Ecosystems May Benefit from Gulf Oil Spill”