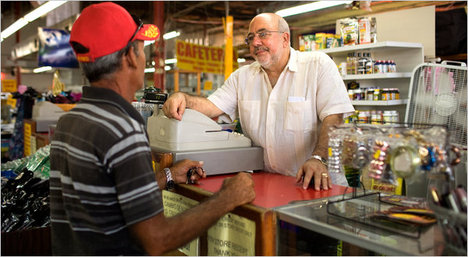 “Serafin Blanco is the owner of Ñooo! ¡Que Barato!, a huge discount store in Hialeah, Fla., where recent arrivals stock up on $1.99 flip-flops and other items for relatives to resell in Cuba.” Source of caption and photo: online version of the NYT article quoted and cited below.

(p. A6) “Things move very slowly in Cuba be-(p. A9)cause they are very, very concerned about breaking the balance of power with economic reforms,” said Jorge Sanguinetty, president of the Association for the Study of the Cuban Economy, a research group. “This is the reality. They don’t want to emulate Gorbachev when he started making reforms in Russia and the whole thing came down.”

Mr. Sanguinetty, who served as a senior economic official with the Cuban government until he resigned in June 1966, said that Cuba might be just beginning the long, painstaking process of rebuilding the most basic economic relationships. He noted that Cuba even eliminated accounting schools in the first decade after the 1959 revolution because officials thought money would be unnecessary, and that many Cubans had no experience with credit cards, banks or checks. Now, he said, the government must move forward — with import-export licenses, with clearer communication about rules — if it hopes to make entrepreneurs a vital element of the economy.