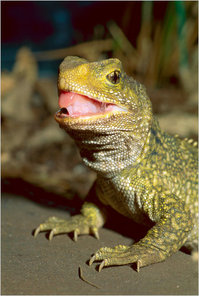 “TUATARA. The tuatara, scientists have learned, is in some ways a so-called living fossil.” Source of caption and photo: online version of the NYT article quoted and cited below.

(p. D1) . . . the animal that may well be New Zealand’s most bizarrely instructive species at first glance looks surprisingly humdrum: the tuatara. A reptile about 16 inches long with bumpy, khaki-colored skin and a lizardly profile, the tuatara could easily be mistaken for an iguana. Appearances in this case are wildly deceptive. The tuatara — whose name comes from the Maori language and means “peaks on the back” — is not an iguana, is not a lizard, is not like any other reptile alive today.

In fact, as a series of recent studies suggest, it is not like any other vertebrate alive today. The tuatara, scientists have learned, is in some ways a so-called living fossil, its basic skeletal layout and skull shape almost identical to that of tuatara fossils dating back hundreds of millions of years, to before the rise of the dinosaurs. Cer-(p. D2)tain tuatara organs and traits also display the hallmarks of being, if not quite primitive, at least closer to evolutionary baseline than comparable structures in other animals.
. . .
Tuataras are living fossils in more than one sense of the term. Through long-term capture, tag and recapture studies that were begun right after World War II, researchers have found that tuataras match and possibly exceed in attainable life span that other Methuselah of the animal kingdom, the giant tortoise. “Tuataras routinely live to 100, and I couldn’t tell you they don’t live to 150, 200 years or even more,” said Dr. Daugherty.
They live, and live it up. “We know there are females that are still reproducing in their 80s,” said Dr. Daugherty. At the Southland Museum and Art Gallery in Invercargill, New Zealand, a captive male tuatara named Henry, a local celebrity that had been nasty and unruly for decades until a malignancy was removed from his genitals, mated with an 80-year-old female named Mildred, and last year became a first-time father — at the age of 111.