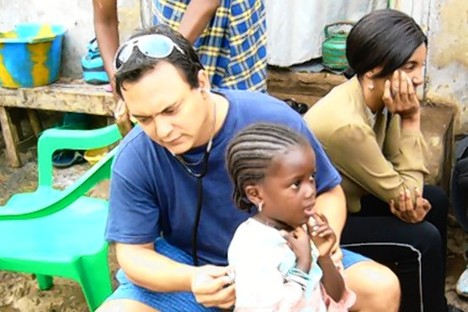 “Dr. Felix Ramírez in Gambia in 2008.” Source of caption and photo: online version of the WSJ article quoted and cited below.

(p. A1) Felix Ramírez slipped into an Internet cafe in the West African nation of The Gambia, scoured the Web for contact information for U.S. diplomats, then phoned the U.S. embassy in Banjul, the capital.

He told the receptionist he was an American tourist who had lost his passport, and asked to speak to the visa section. As he waited to be connected, he practiced his script: “I am a Cuban doctor looking to go to America. When can we meet?”
Dr. Ramírez says he was told to go to a crowded Banjul supermarket and to look for a blond woman in a green dress–an American consular official. They circled one another a few times, then began to talk.
That furtive meeting in September 2008 began a journey for the 37-year-old surgeon that ended in May 2009 in Miami, where he became a legal refugee with a shot at citizenship.
Dr. Ramírez is part of a wave of Cubans who have defected to the U.S. since 2006 under the little-known Cuban Medical Professional Parole immigration program, which allows Cuban doctors and some other health workers who are serving their government overseas to enter the U.S. immediately as refugees. Data released to The Wall Street Journal under the Freedom of Information Act shows that, through Dec. 16, 1,574 CMPP visas have been issued by U.S. consulates in 65 countries.
Cuba has been sending medical “brigades” to foreign countries since 1973, helping it to win friends abroad, to back “revolutionary” regimes in places like Ethiopia, Angola and Nicaragua, and perhaps most importantly, to earn hard currency. Communist Party newspaper Granma reported in June that Cuba had 37,041 doctors and other health workers in (p. A12) 77 countries. Estimates of what Cuba earns from its medical teams–revenue that Cuba’s central bank counts as “exports of services”–vary widely, running to as much as $8 billion a year. Many Cubans complain that the brigades have undermined Cuba’s ability to maintain a high standard of health care at home. 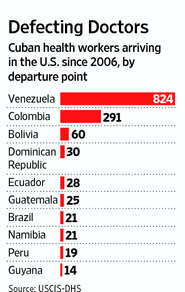