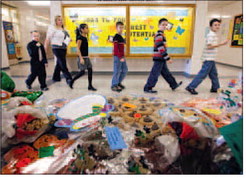 “Schools like Omaha’s Masters Elementary, which held a recent holiday bake sale, count on the profits from selling cupcakes, caramel corn and other goodies to raise money for field trips and other activities.” Source of caption and photo: online version of the Omaha World-Herald article quoted and cited below.

At Omaha’s Masters Elementary, cupcakes, fudge and other bake-sale treats raise $500 for field trips, rain jackets for the safety patrol and playground equipment.

But the federal government could slam the brakes on those brownies and lower the boom on the lemon bars.
A child nutrition bill passed recently by Congress gives a fed­eral agency the power to limit the frequency of school bake sales and other school-sponsored fundraisers that sell unhealthy food.
To some, the bake sale provision makes about as much sense as leav­ing the marshmallows out of Rice Krispies treats.
It maybe makes sense for the fed­eral government to monitor the qual­ity of ground beef, eggs and milk sold in grocery stores. But caramel corn and snicker doodles whipped up by parents for school bake sales?
“Aren’t there more important (p. 2A) things for them to be wor­ried about?” Sandy Hatcher, president of Masters’ parent organization, said of the fed­eral government.