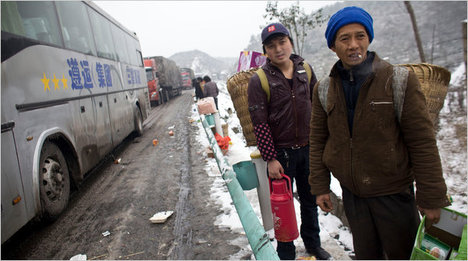 “Enterprising residents of Hetaocun sold food to stranded travelers at a markup.” Source of caption and photo: online version of the NYT article quoted and cited below.

(p. A7) HETAOCUN, China — Compared with some of the more spectacular recent traffic jams in China, among them a 60-mile snarl last summer that paralyzed a major artery outside Beijing for two weeks, the thousands of travelers who spent the night trapped on a snow-coated highway in southwest Guizhou Province on Monday did not even warrant a mention in the local news media.
. . .
Stranded drivers chain-smoked, stomped their feet against the chill and cursed the government for failing to come to their rescue. As the night wore on, fuel lines froze and cellphone batteries died.
The residents of Hetaocun, however, saw the unmoving necklace of taillights from their mountain village and got entrepreneurial. They roused children from their beds, loaded boxes of instant noodles into baskets and began hawking their staples to a captive clientele. The 500 percent markup did not appear to dent sales.
“It rarely snows here, so this is a good thing,” said Yi Zhonggui, 42, as he wove past stalled vehicles with his wife and 4-year-old daughter lugging thermoses of hot water.
As the supply of noodles ran low, residents began gathering up the walnuts that give the village its name. In between cries of “walnuts, walnuts,” salesmen like Chen Xianneng obliged the desperate with snippets of news from the front, even if the information was based on hearsay.