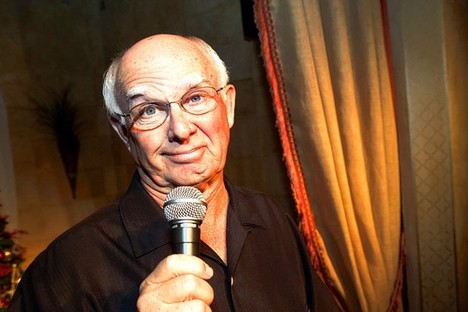 “Gid Pool performing at the Buford Variety Theater . . . ” Source of caption and photo: online version of the WSJ article quoted and cited below.

(p. R1) It’s easy, these days, to think about later life and retirement as limiting. And with good reason: The economy remains fragile; nest eggs are smaller than they should be; and Social Security and Medicare are looking pale. Millions of people are delaying retirement and scaling back plans for the future.

And then there’s Gid Pool.
Almost five years ago, on something of a lark, he enrolled in a class near his home in North Port, Fla., that taught stand-up comedy. He was 61 years old. Today, he performs in clubs, theaters, colleges and corporate settings throughout much of the South, playing at times to hundreds of people and clearing as much as $1,000 an evening. For good measure, he spends, on average, a week each month on cruise ships, where he teaches comedy classes.
. . .
“I was thinking last night about how lucky I am, at this stage in my life, to have something that really gets me up in the morning,” he says. “I saw my grandfather, an engineer on the Illinois Central Railroad, turn my age with a body beaten down by his daily job. My father was a pilot in World War II and suffered all his adult life from an injury in a plane crash.
“Today I’m part of a generation that has literally been given a second chance to live a first life. People say you don’t get a do-over in life. I beg to differ.”

For the full story, see:
GLENN RUFFENACH. “Did You Hear the One About the Retired Real-Estate Agent? He became a stand-up comedian. And he has never been happier.” The Wall Street Journal (Mon., December 20, 2010): R1 & R9.
(Note: ellipsis added.)