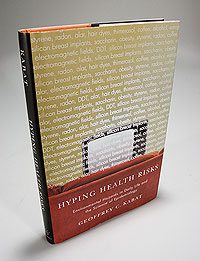 (p. A13) In “Hyping Health Risks,” Geoffrey Kabat, an epidemiologist himself, shows how activists, regulators and scientists distort or magnify minuscule environmental risks. He duly notes the accomplishments of epidemiology, such as uncovering the risks of tobacco smoking and the dangers of exposure to vinyl chloride and asbestos. And he acknowledges that industry has attempted to manipulate science. But he is concerned about a less reported problem: “The highly charged climate surrounding environmental health risks can create powerful pressure for scientists to conform and to fall into line with a particular position.”

Mr. Kabat looks at four claims — those trying to link cancer to man-made chemicals, electromagnetic fields and radon and to link cancer and heart disease to passive smoking. In each, he finds more bias than biology — until further research, years later, corrects exaggeration or error.
. . .
I know whereof Mr. Kabat speaks. In 1992, as the producer of a PBS program, I interviewed an epidemiologist who was on the EPA’s passive-smoking scientific advisory board. He admitted to me that the EPA had put its thumb on the evidentiary scales to come to its conclusion. He had lent his name to this process because, he said, he wanted “to remain relevant to the policy process.” Naturally, he didn’t want to appear on TV contradicting the EPA.

For the full review, see:
RONALD BAILEY. “Bookshelf; Scared Senseless.” The Wall Street Journal (Mon., AUGUST 11, 2008): A13.
(Note: ellipsis added.)
(Note: the first paragraph quoted above has slightly different wording in the online version than the print version; the second paragraph quoted is the same in both.)