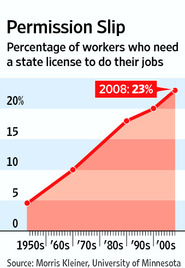 (p. A1) . . . economists–and workers shut out of fields by educational requirements or difficult exams–say licensing mostly serves as a form of protectionism, allowing veterans of the trade to box out competitors who might undercut them on price or offer new services.

“Occupations prefer to be li-(p. A16)censed because they can restrict competition and obtain higher wages,” said Morris Kleiner, a labor professor at the University of Minnesota. “If you go to any statehouse, you’ll see a line of occupations out the door wanting to be licensed.”
While some states have long required licensing for workers who handle food or touch others–caterers and hair stylists, for example–economists say such regulation is spreading to more states for more industries. The most recent study, from 2008, found 23% of U.S. workers were required to obtain state licenses, up from just 5% in 1950, according to data from Mr. Kleiner. In the mid-1980s, about 800 professions were licensed in at least one state. Today, at least 1,100 are, according to the Council on Licensure, Enforcement and Regulation, a trade group for regulatory bodies. Among the professions licensed by one or more states: florists, interior designers, private detectives, hearing-aid fitters, conveyor-belt operators and retailers of frozen desserts.
. . .
Mr. Kleiner, of the University of Minnesota, looked at census data covering several occupations that are regulated in some states but not others, including librarians, nutritionists and respiratory therapists. He found that employment growth in those professions was about 20% greater, on average, in the unregulated states between 1990 and 2000.
Licensing can also drive up costs to consumers. Licensed workers earn, on average, 15% more than their unlicensed counterparts in other states–a premium that may be reflected in their prices, according to a study published by the National Bureau of Economic Research and conducted by Mr. Kleiner and Alan Krueger, an economist at Princeton University.
Mr. Kleiner estimates that across the U.S. economy, occupational licensing adds at least $116 billion a year to the cost of services, which amounts to about 1% of total consumer spending. In a look at dentistry, Mr. Kleiner found that the average price of dental services rose 11% when a state made it more difficult to get a dental license.

“Some of the jobs that require licensing in one or more states.” Source of caption and table: online version of the WSJ article quoted and cited above.