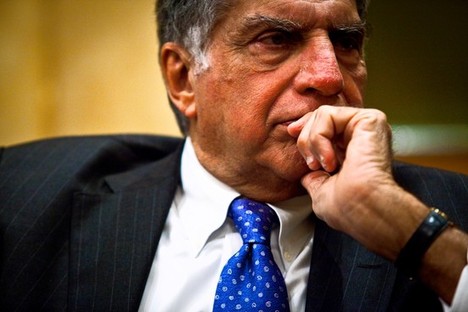 “In the twilight of his career heading Tata Group, Ratan Tata says he was thwarted in his homeland by arbitrary regulatory decisions and corruption.”

(p. B1) NEW DELHI–Ratan Tata has transformed Tata Group into the world’s best-known Indian company, the owner of Jaguar cars, the Pierre Hotel in New York and Tetley tea.

But in the twilight of his career as chairman of the $67.4 billion conglomerate, Mr. Tata, 73 years old, is frustrated that he hasn’t been able to expand more in his native India. He says bureaucratic delays, arbitrary regulatory decisions and widespread corruption have thwarted his domestic ambitions in such sectors as steel, power, aviation and telecommunications.
. . .
. . . 20 years after . . . reforms began, New Delhi still exerts tight control over large swaths of the economy. All too often, Mr. Tata and other critics say, regulators are picking winners and losers through their decisions, either by delaying certain projects and green-lighting others or by freeing up natural resources for some companies at the expense of others.
“Economically it is a much more open environment. It’s one that fosters a fair amount of free enterprise until you need approvals or some kind of sanction to get something done,” Mr. Tata said during an interview at the Tata-owned Taj Mahal hotel in New Delhi. “Then you still have problems, and maybe more acute then you did before.”
. . .
As chairman, one of Mr. Tata’s first goals was to get Tata back into the airline business. The company’s former airline had been nationalized to form Air India. He planned a venture with Singapore Airlines. But, he says, aviation ministry bureaucrats held up his application for years despite his constant prodding. An aviation ministry spokeswoman didn’t respond to a request for comment.
In 1998, after seven years of government inaction, Mr. Tata withdrew the application. “We went through three governments, three prime ministers, and each time there was a particular individual that thwarted our efforts,” he said in a TV interview last fall. He recalled a conversation with a fellow industrialist several years ago. “He said, ‘I don’t understand. You people are very stupid…. Why don’t you just pay?'”
Paying bribes isn’t his style, Mr. Tata says. “Maybe I’m stupid or old fashioned, but I really want to go to bed at night saying I haven’t succumbed to this.”

For the full story, see:
AMOL SHARMA. “India’s Tata Finds Home Hostile; Chair of Nation’s Best-Known Company Says Bureaucracy Slows Domestic Growth.” The Wall Street Journal (Weds., April 13, 2011): B1-B2.
(Note: ellipses added, except for the one after the word “stupid” which appears in the original.)
(Note: in the online version of the article, the final paragraph quoted above reads: “Mr. Tata says paying bribes isn’t his style. “Maybe I’m stupid or old fashioned, but I really want to go to bed at night saying I haven’t succumbed to this,” he says.”