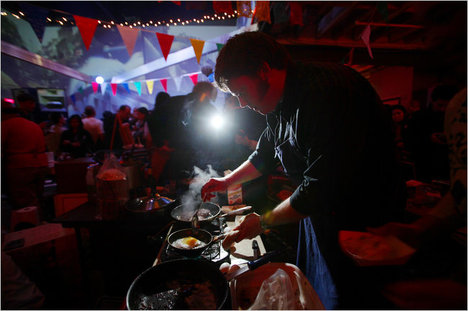 “The underground market seeks to encourage food entrepreneurship by helping young vendors avoid the costs — including for health permits and liability insurance — required by legitimate farmers’ markets. Neil Davidson prepared part of a Hawaiian breakfast dish for a customer.” Source of caption and photo: online version of the NYT article quoted and cited below.

(p. A1) SAN FRANCISCO — . . .
. . .
At midnight, the smell of stir-fried pork bellies was wafting through the Mission district. There was live music, liquor, bouncers, a disco ball — and a line waiting to sample hundreds of delicacies made mostly on location, among them bacon-wrapped mochi (a Japanese rice paste) and ice cream made from red beets, Guinness and chocolate cake.
In a sense it is civil disobedience on a paper plate.
The underground market seeks to encourage food entrepreneurship by helping young vendors avoid roughly $1,000 a year in fees — including those for health permits and liability insurance — required by legitimate farmers markets. Here, where the food rave — call it a crave — was born, the market organizers sidestep city health inspections by operating as a private club, requiring that participants become “members” (free) and sign a disclaimer noting that food might not be prepared in a space that has been inspected.
. . .
(p. A12) Where psychedelic drugs famously transported another self-conscious San Francisco generation, the rebel act of choice by Valerie Luu, 23, a first-generation Vietnamese chef, is deep-frying string cheese in a cast-iron pan.
“When I was their age I was doing drugs and going to rock shows,” said Novella Carpenter, an urban farmer and author who recently got into a spat with the City of Oakland for selling chard and other produce at a pop-up farm stand without a permit. “That’s not their culture,” she continued. “Their culture is food — incredible yummy-tasting food.”
. . .
The underground market here, which also has a less chic daytime component, was started by Iso Rabins, 30, the founder of ForageSF, a company that began with foraging walks and dinners featuring dishes like wild nettle soup with crème fraiche.
He started in 2009 from a private home after observing that many friends could not afford to sell at farmers markets, which requires business and product liability insurance (around $250), space rental ($40 to $55 a day), yearly member fees (around $110), and a health and safety permit (about $500). The use of commercial kitchens would cost an additional $45 to $75 an hour, Mr. Rabins noted, and making jam can take eight hours or more. “The small-batch economics just don’t work,” he said.
The goal is to be an incubator for culinary start-ups, and be a profit-making venture. Vendors pay $50 to reserve a cooking space and return 10 percent of sales over $500 to ForageSF. “The feeling in the food community is that if you’re making money, it’s not something you’re passionate about,” Mr. Rabins said. “But if we actually want to change anything — dedicate our lives to it — we need to make money doing it,” he said.
Amateur cooks around the country are pushing to have the right to sell unlicensed goods directly to consumers. So-called “cottage food” laws that allow products considered nonhazardous, like pies and cookies, exist in 18 states, with five more considering similar legislation.