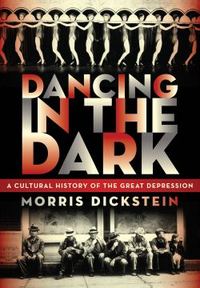 (p. 17) After a fond, lingering look at “Shall We Dance” — Ginger Rogers and Fred Astaire in the spotlight, romancing to songs by George and Ira Gershwin — Dickstein sums up expertly: “Each number is a miniature of the movie, moving from singing alone, dancing alone, dancing with the wrong person, or dancing to the wrong music to making beautiful music together.” With his next breath he roughly reminds us of the context: “It’s the music, the dancing, that saves all this from familiar romantic cliché. As photography documents the Depression, dance countermands it.” And then he takes one more step back to give us an even broader view: “The culture of elegance, as represented by Astaire and the Gershwins, was less about the cut of your tie and tails than the cut of your feelings, the inner radiance that was one true bastion against social suffering. They preserved in wit, rhythm and fluidity of movement what the Depression almost took away, the high spirits of Americans, young and modern, who had once felt destined to be the heirs and heiresses of all the ages.” Sheer delight, pure escapism, serves its cathartic purpose — and it means something, too.

Which makes the omission of Walt Disney (his name doesn’t even appear in the index) all the more perplexing. Even if one rejects the provocative claim by the historian Warren Susman that “Mickey Mouse may in fact be more important to an understanding of the 1930s than Franklin Roosevelt,” it’s hard to deny Disney a place in the pantheon of the decade’s movie­makers, if only for “Snow White and the Seven Dwarfs” and “Fantasia.” Whether or not the cartoons that delighted ’30s audiences are complex works of art, they would have slotted nicely into several of Dickstein’s chapters. On the lookout for a cultural artifact that served to “lift sagging morale and stimulate optimism about the future”? Try any one of the dozens of animated shorts featuring that cartoon collective, Mickey, Donald Duck and Goofy. Every gag is an explosion of energy, and the whirligig of slapstick invention always ends happily, thanks to the orchestrated efforts of our heroes. Mickey, described by Disney as “a little fellow trying to do the best he could,” may have been born in the late ’20s, but he grew up a pure creature of the ’30s.