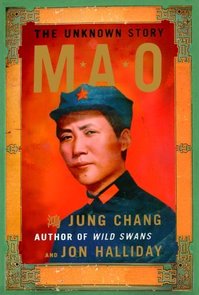 (p. 11) After Mao comes to power, Chang and Halliday show him continuing his thuggery. This is more familiar ground, but still there are revelations. Mao used the Korean War as a chance to slaughter former Nationalist soldiers. And Mao says some remarkable things about the peasants he was supposed to be championing. When they were starving in the 1950’s, he instructed: “Educate peasants to eat less, and have more thin gruel. The State should try its hardest . . . to prevent peasants eating too much.” In Moscow, he offered to sacrifice the lives of 300 million Chinese, half the population at the time, and in 1958 he blithely declared of the overworked population: “Working like this, with all these projects, half of China may well have to die.”

At times, Mao seems nuts. He toyed with getting rid of people’s names and replacing them with numbers. And discussing the possible destruction of the earth with nuclear weapons, he mused that “this might be a big thing for the solar system, but it would still be an insignificant matter as far as the universe as a whole is concerned.”
Chang and Halliday recount how the Great Leap Forward led to the worst famine in world history in the late 1950’s and early 1960’s, and how in 1966 Mao clawed his way back to supreme power in the chaos of the Cultural Revolution. Some of the most fascinating material involves Zhou Enlai, the longtime prime minister, who comes across as a complete toady of Mao, even though Mao tormented him by forcing him to make self-criticisms and by seating him in third-rate seats during meetings. In the mid-1970’s, Zhou was suffering from cancer and yet Mao refused to allow him to get treatment – wanting Zhou to be the one to die first. “Operations are ruled out for now” for Zhou, Mao declared on May 9, 1974. “Absolutely no room for argument.” And so, sure enough, Zhou died in early 1976, and Mao in September that year.
This is an extraordinary portrait of a monster, who the authors say was responsible for more than 70 million deaths.