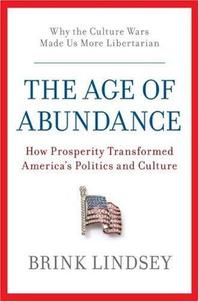 (p. 16) Various scolds and worrywarts have exclaimed, with Wordsworth, that “getting and spending, we lay waste our powers.” To such Jeremiahs, Lindsey provides an essentially cheerful, although not altogether so, counterpoint: affluence has made America a more libertarian, and hence a nicer, place.

First came material improvement. Until very recently, he notes, when people prayed for their daily bread, they often were praying for just that. Not so long ago, many ordinary lives of quiet desperation ended especially dismally: about 10 percent of burials in New York City in 1889 were in potter’s fields. In 1900, 1.75 million children between the ages of 10 and 15 — almost one-fifth of all children in that age cohort — were in the work force. Children provided one-fourth to one-third of the incomes for working-class families, which spent more than 90 percent of their household earnings on food, shelter and clothing. In 1900, Americans spent nearly twice as much on funerals as on medicine, and less than 2 percent of Americans took vacations.
. . .
Affluence, Lindsey writes, has provided “a mad proliferation of choices — and what, in the end, is freedom but the ability to choose?”