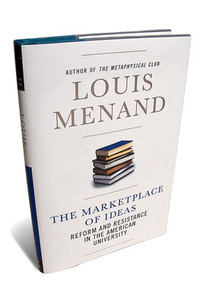 (p. 30) Champions of the market can turn up in the oddest places. At the same time that bankers and businessmen are acknowledging the downsides of unregulated capitalism, college and university reformers are urging the academy to more closely embrace the marketplace.

Amid the raft of new books on the failings of higher education, some challenge the longtime separation between ivy-covered idealists and real-world demands. Scholarly disdain for getting and spending, they argue, has caused serious trouble both in the classroom and in the budget office.
In his slim book “The Marketplace of Ideas,” Louis Menand, an English professor at Harvard and a Pulitzer Prize-winning author, offers to answer a few questions about the humanities, like why professors all seem to have similar politics and why it is so difficult to implement a core curriculum.
. . .
Mr. Garland also wants to bring some market discipline to the culture of academia. While professors tend to be progressives, they are stubbornly conservative when it comes to change. Indeed, as Mr. Menand points out, early reformers argued that the only way to elevate excellence above profits in a capitalist society was by protecting the profession from the market’s insistence on cash rewards.
The result, Mr. Garland maintains, is that professors are oblivious to the costs of complex procedures, drawn-out debates and layers of committees; appeals to increase efficiency and productivity are routinely scorned. 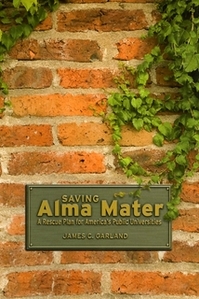