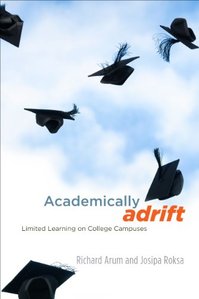 (p. D9) Andrew Carnegie didn’t think much of college. More than a century ago, he looked around at the men commanding the industries of the day and found that few had wasted their time lollygagging on a campus quad. “The almost total absence of the graduate from high positions in the business world,” he wrote in “The Empire of Business,” “seems to justify the conclusion that college education, as it exists, is fatal to success in that domain.”

. . .
. . . , as the reward for the collegiate credential has been going up, what goes into getting that degree has been going down. So find sociologists Richard Arum and Josipa Roksa in their book “Academically Adrift” (University of Chicago Press). Institutions of higher learning are “focused more on social than academic experiences,” they write. “Students spend very little time studying, and professors rarely demand much from them in terms of reading and writing.” More than a third of students do less than five hours of studying a week–and these shirkers end up, on average, earning B’s.
Ms. Roksa, who teaches at University of Virginia, and Mr. Arum, a professor at New York University, mined data from thousands of sophomores who retook a learning assessment test they had first been given when they arrived at college. Nearly half the students showed no sign of intellectual progress after two years of undergraduate endeavor.
. . .
What would Mr. Carnegie have thought of it? “While the college student has been learning a little about the barbarous and petty squabbles of a far-distant past,” he wrote, “or trying to master languages which are dead…the future captain of industry is hotly engaged in the school of experience, obtaining the very knowledge required for his future triumphs.” Mr. Carnegie may have thought the knowledge gained at college was “adapted for life upon another planet,” but he did expect that the students were gathering some sort of knowledge. Shouldn’t parents footing the massive tab for tuition be able to expect the same?