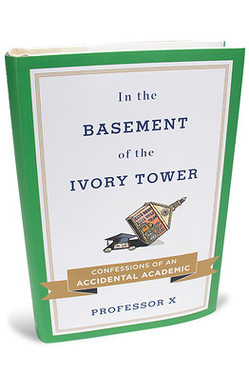 Source of book image: online version of the WSJ review cited, but not quoted, far below.

Reviewer P. Chrzanowski on Amazon says that Professor X uses the phrase “creeping credentialism.” That sounds like a useful phrase, and an unfortunate phenomenon.

(p. C3) He is a bit wicked, this Professor X. His book-length expansion of the article, “In the Basement of the Ivory Tower,” is rippled with mellow sarcasm. Reading one student’s terrible paper about Sylvia Plath, he says: “I pictured her writing it in a bar, or while driving to class or skydiving. Maybe she composed it as one long text message to herself.”
. . .
The tone of his essay, and of this impertinent book, however, is as plaintive as it is lemony. The author is delivering unhappy news, and he knows it. It’s as if he’s proposing to paste an asterisk on the American dream. “Telling someone that college is not right for him seems harsh and classist, vaguely Dickensian,” Professor X writes, “as though we were sentencing him to a life in the coal mines.”
Yet why is it so important to Barack Obama (a champion of community colleges) and those doing America’s hiring, he asks, that “our bank tellers be college educated, and our medical billing techs, our county tax clerks”? College — even community college — drives many young people into debt. Many others lack rudimentary study skills or any scholarly inclination. They want to get on with their lives, not be forced to analyze the meter in “King Lear” in night school in order to become a cop or a nurse’s aide.
“No one is thinking about the larger implications, or even the morality,” Professor X says, “of admitting so many students to classes they cannot possibly pass.”

For a somewhat less friendly review, see:
ERIC FELTEN. “BOOKSHELF; A Little Learning; Do you have to read ‘King Lear’ to write a speeding ticket?.” The Wall Street Journal (Weds., MARCH 30, 2011): A17.

Book under review:
X, Professor. In the Basement of the Ivory Tower: Confessions of an Accidental Academic. New York: Viking, 2011.