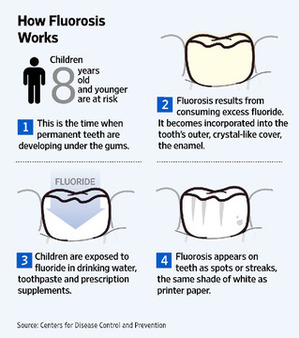 WSJ article quoted and cited below.

Back when I was a child, decades ago, my family opposed the fluoridation of public water supplies on the grounds that there might be health risks, and people could individually choose to apply fluoride to their teeth.
Well, now the government is suggesting that too much fluoride can harm children’s teeth, and that the target level for fluoride in the water should be reduced.

(p. A3) The federal government lowered its recommended limit on the amount of fluoride in drinking water for the first time in nearly 50 years, saying that spots on some children’s teeth show they are getting too much of the mineral.

Fluoride has been added to U.S. water supplies since 1945 to prevent tooth decay. Since 1962, the government has recommended adding a range of 0.7 milligrams to 1.2 milligrams per liter.
. . .
A study conducted between 1999 and 2004 by the federal Centers for Disease Control and Prevention found that 41% of children between the ages of 12 and 15 exhibited signs of dental fluorosis, a spotting or streaking on the teeth. That was up from nearly 23% found in a study from 1986 and 1987.
. . .
. . . for years, some groups have called for an end to fluoridation, arguing that it poses serious health dangers, including increased risk of bone fractures and of decreased thyroid function. Friday’s announcement did little to appease such critics.
“The only rational course of action is to stop water fluoridation,” said Paul Connett, executive director of the Fluoride Action Network, a nonprofit advocacy and fluoride-education group