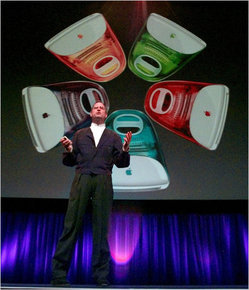 “Steve Jobs, after returning to Apple in 1999. Would Apple be what it is today had he never left?” Source of caption and photo: online version of the NYT article quoted and cited below.

(p. 5) Suppose Mr. Jobs had not left in 1985. Suppose he had convinced the Apple board to oust his nemesis, John Sculley, then chief executive and president. Under Mr. Jobs’s uninterrupted direction, would Apple have arrived at the pinnacle it has reached today, but 12 years earlier?

It’s hard to see how anything like that would have transpired. The Steve Jobs who returned to Apple was a much more capable leader — precisely because he had been badly banged up. He had spent 12 tumultuous, painful years failing to find a way to make the new company profitable.
“I am convinced that he would not have been as successful after his return at Apple if he hadn’t gone through his wilderness experience at Next,” said Tim Bajarin, president of Creative Strategies, a technology consulting company.
. . .
Mr. Jobs’s lieutenants tried to warn him away from certain disaster, but he was not receptive. In 1992-93, seven of nine Next vice presidents were shown the door or left on their own.
In this period, Mr. Jobs did not do much delegating. Almost every aspect of the machine — including the finish on interior screws — was his domain. The interior furnishings of Next’s offices, a stunning design showplace, were Mr. Jobs’s concern, too. While the company’s strategy begged to be re-examined, Mr. Jobs attended to other matters. I spoke with many current and former Next employees for my 1993 book, “Steve Jobs and the NeXT Big Thing.” According to one of them, while a delegation of visiting Businessland executives waited on the sidewalk, Mr. Jobs spent 20 minutes directing the landscaping crew on the exact placement of the sprinkler heads.
Next’s computer hardware and software were filled with innovations that drew a small, but devoted, following. Mr. Jobs had created the first easy-to-use Unix machine, but the mainstream marketplace shrugged. He had already helped bring to market an easy-to-use machine, the Mac, so the Next couldn’t differentiate itself enough — and certainly not at the price the company charged.
. . .
And he had always been able to attract great talent. What he hadn’t learned before returning to Apple, however, was the necessity of retaining it. He has now done so. One of the unremarked aspects of Apple’s recent story is the stability of the executive team — no curb filled with dumped managers.
Kevin Compton, who was a senior executive at Businessland during the Next years, described Mr. Jobs after returning to Apple: “He’s the same Steve in his passion for excellence, but a new Steve in his understanding of how to empower a large company to realize his vision.” Mr. Jobs had learned from Next not to try to do everything himself, Mr. Compton said.