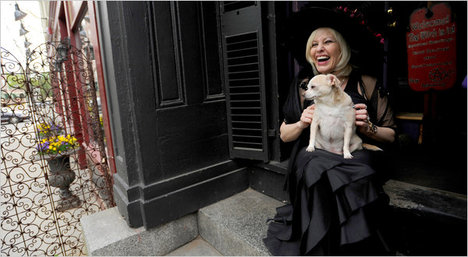 “Lorelei Stathopoulos is concerned Salem will lose its “quaint reputation.”” Source of caption and photo: online version of the NYT article quoted and cited below.

(p. A11) SALEM, Mass. — Like any good psychic, Barbara Szafranski claims she foresaw the problems coming.

Her prophecy came in 2007, as the City Council was easing its restrictions on the number of psychics allowed to practice in this seaside city, where self-proclaimed witches, angels, clairvoyants and healers still flock 319 years after the notorious Salem witch trials. Some hoped for added revenues from extra licenses and tourists. Others just wanted to bring underground psychics into the light.
Just as Ms. Szafranski predicted, the number of psychic licenses has drastically increased, to 75 today, up from a mere handful in 2007. And now Ms. Szafranski, some fellow psychics and city officials worry the city is on psychic overload.
. . .
“Many of them are not trained,” she said of her rivals. “They don’t understand that when you do a reading you hold a person’s life in your hands.”
Christian Day, a warlock who calls himself the “Kathy Griffin of witchcraft,” thinks the competition is good for Salem.
“I want Salem to be the Las Vegas of psychics,” said Mr. Day, who used to work in advertising and helped draft the 2007 regulations. Since they went into effect, he has opened two stores, Hex and Omen.
. . .
Now, talk has started about new regulations that would include a cap on the number of psychic businesses, but the grumbling has in no way reached the level of viciousness that occurred in 2007, when someone left the mutilated body of a raccoon outside Ms. Szafranski’s shop and Mr. Day and Ms. Stathopoulos got into a fight. 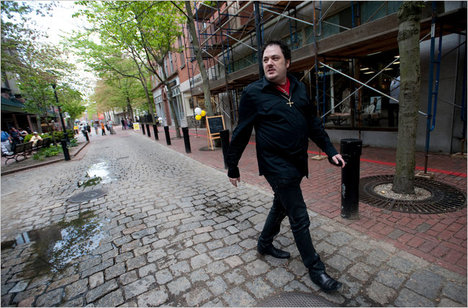 “Christian Day, who owns two shops, thinks competition is a good thing.” Source of caption and photo: online version of the NYT article quoted and cited above.