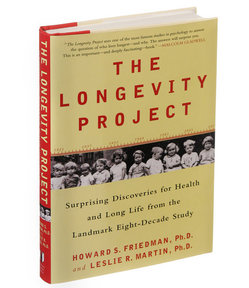 (p. D3) Cheerfulness, optimism, extroversion and sociability may make life more enjoyable, but they won’t necessarily extend it, Howard S. Friedman and Leslie R. Martin found in a study that covered eight decades. The key traits are prudence and persistence. “The findings clearly revealed that the best childhood personality predictor of longevity was conscientiousness,” they write, “the qualities of a prudent, persistent, well-organized person, like a scientist-professor — somewhat obsessive and not at all carefree.”
. . .
There are three explanations for the dominant role of conscientiousness. The first and most obvious is that conscientious people are more likely to live healthy lifestyles, to not smoke or drink to excess, wear seat belts, follow doctors’ orders and take medication as prescribed. Second, conscientious people tend to find themselves not only in healthier situations but also in healthier relationships: happier marriages, better friendships, healthier work situations.
The third explanation for the link between conscientiousness and longevity is the most intriguing. “We thought it must be something biological,” Dr. Friedman said. “We ruled out every other factor.” He and other researchers found that some people are biologically predisposed to be not only more conscientiousness but also healthier. “Not only do they tend to avoid violent deaths and illnesses linked to smoking and drinking,” they write, “but conscientious individuals are less prone to a whole host of diseases, not just those caused by dangerous habits.” The precise physiological explanation is unknown but seems to have to do with levels of chemicals like serotonin in the brain.
As for optimism, it has its downside. “If you’re cheerful, very optimistic, especially in the face of illness and recovery, if you don’t consider the possibility that you might have setbacks, then those setbacks are harder to deal with,” Dr. Martin said. “If you’re one of those people who think everything’s fine — ‘no need to back up those computer files’ — the stress of failure, because you haven’t been more careful, is harmful. You almost set yourself up for more problems.”