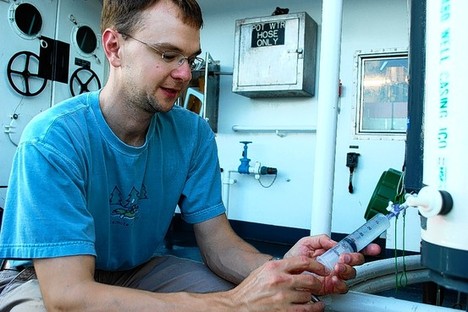 “Dr. John Kessler, lead author of the study, examining a water sample.” Source of caption and photo: online version of the WSJ article quoted and cited below.

(p. A3) Bacteria made quick work of the tons of methane that billowed into the Gulf of Mexico along with oil from the Deepwater Horizon blowout, clearing the natural gas from the waterway within months of its release, researchers reported Friday.

The federally funded field study, published online in the journal Science, offers peer-reviewed evidence that naturally occurring microbes in the Gulf devoured significant amounts of toxic chemicals in natural gas and oil spewing from the seafloor, which researchers had thought would persist in the region’s water chemistry for years.
“Within a matter of months, the bacteria completely removed that methane,”said microbiologist David Valentine at the University of California at Santa Barbara. “The bacteria kicked on more effectively than we expected,” he said.
. . .
“We were shocked,” said chemical oceanographer John Kessler at Texas A&M, who was the lead author of the Science study. “We thought the methane would be around for years.”
. . .
“They showed that, even when there is a massive release of methane, the ocean can compensate,” said federal microbiologist Terry Hazen at the Lawrence Livermore National Laboratory, who has long championed the use of methane-oxidizing microbes to biodegrade oil spills. 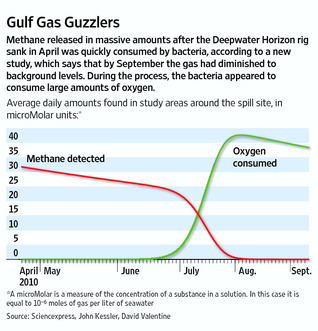